Mama and the Meatballs 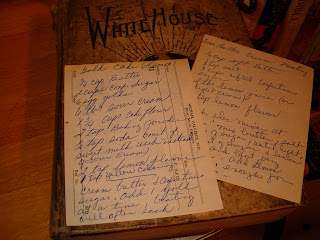 You know, I'm so thankful for the response from you all that I received from my earlier post about Mama's cake recipe and how I came to have it. I was laughing with Good Sister yesterday about how Mama could take a piece of shoe leather tough beef and make it Fillet Mignon. GS said she remembered her Swedish Meatballs and I just howled with laughter. I think I have mentioned before that my kids loved their Grandma's Swedish Meatballs and whenever we came home (being military, it was usually only once or twice a year) they always looked forward to that dish. Now, I wanted to satisfy my family's tastebuds and finally asked her for the recipe. At first I got a lot of the old song and dance about pinches of this and smatterings of that but I had finally convinced her (or so I thought) that she really needed to share the recipe with me. One day I received a card in the mail (we were then living in the Motherland) with the recipe included. I still have it. I was so happy to finally get it that I made up my mind to prepare it that weekend. Now, I know most folks serve the dish on noodles, but we've always been rice eaters, so we serve it over rice. I had gathered my ingredients to me and set to with a sense of pride and, dare I say, joy. When the time in the oven was up, I lifted the heavy baking dish onto the top of the Aga and just enjoyed the wonderful smell that was wafting its way to my nostrils. I had the table set and everything was ready, the rice was done, the asparagus (which only Mac and I eat, I think the boys were using the old allergy to green thing at the time) had been steamed to perfection, the green beans were just right. We all gathered at the table and after saying grace (how apt) we began to dine on what I was hoping was pure ambrosia. Okay, ambrosia it wasn't, but it was good. It didn't taste exactly like Mama's, but it was okay. I was let down a bit, but put it off on the odd tasting British beef (sorry all my Britblogpals...it was the fishy taste that got me). Okay, so off and on we had Swedish Meatballs, but never with the anticipation of that first meal. So, after over three years, we were back in the homeland, on our way to Mama's and of course the second night after we arrived we had, you guessed it, Swedish Meatballs. As soon as I tasted it, I knew that it wasn't the British Beef that affected the taste (at least not much). It was something much more diabolical. It was Mama herself. I looked at her, eyes narrowed in only a way we Douglas women can narrow our eyes (the menfolk swear they see flashes of fire) and asked her quite bluntly, "Mama, what did you leave out of my recipe for the meatballs?" My God that woman could give you the most innocent look, it was driven snow. "Why what do you mean?" she asked, her eyes blinking in complete bafflement. "Don't hand me that malarkey, you left something out. I'm not quite sure what it is, but give me a minute, I'll tell you." I stuck my finger, yes my finger, in the sauce and sucked that sweetly delicious sauce delicately off my finger. I tasted the cream, the cracked pepper. Um, just a little bit more...the hint of butter and salt, the beef drippings...ahh, the cream again....and then, oh yes, and then I had her. "NUTMEG" I cried out. I may as well have yelled J'Accuse...it would have been just as fit. "Now, you don't think I'd intentionally leave anything out of a recipe, surely...it was probably an accident." Well, now I make Swedish Meatballs as good as Mama's. And for Christmas, I'm gonna make us all a "Mama Make a Good Cake"...my wily Mama...what a cook...and she finally came through. The picture is of course the White House Cook Book and on top of it, the handwritten recipe that Mama used. Just seeing her handwriting, I felt her right there with me, urging me on!

It probably was the British beef!!!Not the lack of nutmeg.

Now there's a gift! Swedish meatballs are on Ashley's menu at her wedding! I'll bet they are not as good as yours!

Once again, Susan is the source of good meatballs for our family. I know, I know...you'd think some of her cooking prowess would have rubbed off on me, but no, it didn't. SHE cooks, I taste. It's a GOOD system!

Wow! An Aga, we have an Aga! It is on as we speak. I have burnt many a meal in it...trouble is the flu goes straight into the chimney so no smells alert! LOL!

Great to meet you.
Glad you liked the story of self combusting Uncle Moss!

I'm loving the Mama stories! Have you ever shown a picture of her? I'd love to be able to put a face to the stories.

I know you miss her. I miss mine terribly. Seven years later, I could still cry buckets for her.

Let's face it Sandi, no one can cook like our Mom's :) And we are rice over noodle people too! Have wonderful day! Jenn and Jacqui

How precious to have the recipe written by her! The recipe sounds delish.

Mama's all do that "innocent" face don't they? Wonder if I do it too?

What a great story - but aren't Swedish meatballs usually made with pork mince?

That is such a beautiful post and having the recipe in your mama's writing is such a gift for you! {{HUGS}}

There ain't no cookin' like Mama's cookin'. Too bad my daughter won't ever be able to say that...maybe "there ain't no Mama that can make a meal out of a box like my Mama"...hahaha

I KNOW what you mean about the British beef~ I'm sure it was the Britsh beef!
What is it?????

Sandi that is so cute. I loved the blog and I bet your mama was a real hoot.
my eyes are killing me..I have been to Kari's blog.So sad.

What a character your mom was!

Thanks for another fun story about her. I bet you have a million!

You're not gonna believe this - I just did my post tonight and guess what I made today?! Meatballs! Sweet and Sour Meatballs. I included my recipe. I make mine for an appetizer, but I have served any that are left (which is rare)over rice.

Loved reading another funny story about your Mama.

Hope your Thanksgiving is wonderful...safe, fun, filled with love and many happy memory making moments.

This is truly a gift. And I so love your stories behind each recipe. You really are a gifted writer dear Sandi! And cook, just like that amazing mother of yours! : )
An AGA!! Oh whoa...: )

Have a blessed Thanksgiving Day dear friend...many smiles and much happy laughter.

How sweet luckily you were able to perfect it. I can never do that with my family recipes, but i do come close. That is awesome that you have her stuff in her own handwriting. How comforting that must be!

Hi Sandi, I have checked out the books on Amazon, they look wonderful, have you read any? and if so which ones there are so many of them.
I could not find any reader comments but I rather like the look of 'Snowbound' and 'Christmas' !!
I am reading Agatha Raisin - Vicious Vet at the moment and loving it. I have also just started Shephen Fry's Autobiography, very interesting and very funny too.
And I am reading Jude Law's Biography, quite short really, but he is just simply Gorgeous.
Cheers......xxx

I am sending you a hug ...you have been so kind to me and left such nice notes.
Have a wonderful Thanksgiving.
My prayer is for Karen and her family for their first Christmas without Joey.
My God bless her with happy memories .
Love to you and Wallace.