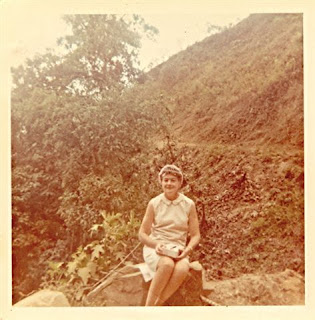 I'm not sure yet what the title of this post should be. It will have to come to me as I tell the story. I often tell you that I was brought up by Ricky and Lucy Ricardo. That's because they were not dissimilar from that famous TV couple. Daddy, the hot blooded Latin (from Quito , Ecuador) and Mama, the zany red head (and only her hairdresser knew for sure) from the Carolina's. The accents meshed somehow, as did the personalities. Their love and devotion often clashed with their tempers, but it always worked out somehow.

Yes, I'll be the first to admit that while their love carried them all over the world, their spats were never dull and often accompanied them along with their luggage. When the green eyed monster reared his ugly head, the luggage became baggage and the 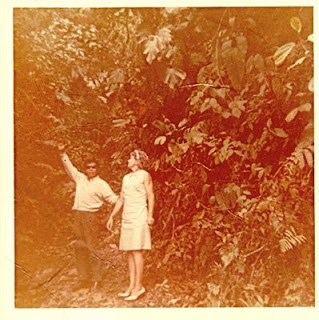 fight would be on. My mother, a beautiful woman, often caught the eye of men and it killed my father, while it simply tickled my mother. I can hear him even now..."that man was looking at you." My mother, smiling at him would simply say, "it's a free world. Looking costs 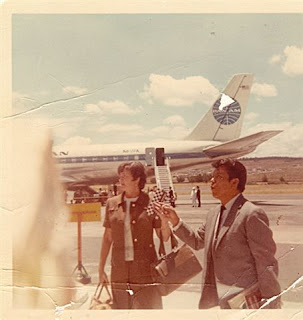 nothing." Glares all around would be the order of the day.

Daddy never talked about himself. He would only talk about Mama and what all she had accomplished in her life, as though she had done it without his help. He would tell about the missions of mercy she often found herself embroiled in, providing medicine in South America for those who could not afford it or were unable to obtain it. Her many acts of kindness and generosity while she and he worked their behinds off in the Valverde Clinic. After losing her in death (of Ovarian Cancer) several years back, we were sure that we would lose him, too. They had rarely spent a night away from each other in over fifty years. We didn't know how this man, who didn't even know how to operate a microwave (but could diagnose a disease often with an exam only) could get along on his own. He refused to move in with any of us, it was just him and his cat.

What we came to call "the Mama Stories" still poured out of him, as though just talking about her brought her close to him. I suppose it does. But we kept urging him to tell us something about himself, and he would haltingly tell us of working in Havana as a Doctor while Batista was still in power, then going to Panama to work, gradually working his way up to the United States. We would be all agog, never having heard these stories before. We came to suspect that he had been hiding his light under Mama's bushel. But in my mind, I could still hear their heated quarrels over minor things, the heated quarrels that made up their life as surely as their love did. If there was some problem that we really didn't want Daddy involved in, I could hear Mama telling us, never mind, let me handle your father. And we knew she could. And would. You see, even I do it...Mama has once again taken over and Daddy is the man standing just behind her, peering over her shoulder. I blame him. He's the one who taught us.
Posted by Sandi McBride at 3:03 PM 25 comments: