My beautiful Lucky Horseshoe...thank you Jenn and Jacqui 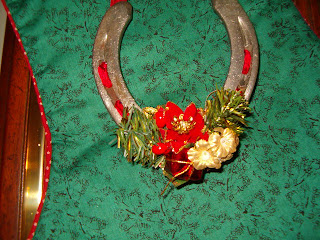 It's Monday morning, the weather outside is crisp and cold, the sky is what we call here "Carolina Blue" with not even a wisp of cloud in the sky. I spent my weekend doing nothing. Well, that's not precisely true, it just felt like doing nothing...there was little work involved and very relaxing. First my younger son and his daughter (the little Princess) came over from Florence to spend the day (allowing his wife time alone to do her college homework) and then my older son and his wife joined us. After slicing veggies and shredding cheese (opps, I lie...the cheese was already shredded...I'm so lazy) taking out the lovely sliced turkey and ham, we assembled subs. They were so good, especially the bell peppers piled high with the onion and lettuce. I love bell peppers...I love them raw, I love them stuffed I love them cut up in Spanish Rice...anyway, we had a nice meal and enjoyed each others company. I started getting excited about the giveaway this coming Saturday. I made a decision about it...I intend to separate the American bloggers from the rest of the world bloggers (you know who you are...UK, Australia, New Zealand, and anyone else) and pick two winners. It feels right. If it feels right, do it. I think it was the snow that had me so happy and feeling like a kid...I wish I could send each and everyone of you a gift. I know that when I received my Lucky Horseshoe from Jenn and Jacqui so prettily decorated with ribbons and bows...and my beautifully handpainted tray (with pansies) that I received from Sandy McTier, who is a brilliant artist herself, how happy I was. There's nothing like a gift to bring your spirits up. Especially a gift that someone puts as much work into as my good friends did into these. They are accepted with the deepest thanks.
I just had to enclose a picture of these lovely things and if I ever get smart enough to do it, I intend to post a picture on my sidebar. Sometimes I can be so dense! But I'm learning...happy Monday everyone, now I'm going to go catch up with all of you. 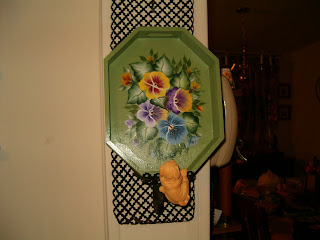 My gorgeous handpainted tray...thank you Sandy

Posted by Sandi McBride at 8:31 AM

Nope....not a single bite. No cake even came into this house. But if it had I would have gone for a corner piece with the big fluffy butter cream rose. :) You guys down there in Carolina got snow. The weather man said we were going to get some but nope..we didn't. It did snow but no accumulation here. It's very cold here today though. We need the cold weather to kill off some of the bugs.

You commented on my today's entry...

"Mac and the boys were shouting out loud...I had to shout too, don't know why...not a big football fan..."

-'Cause he's a little brother, of a more famous older brother.

-'Cause he comes from a Football Dynasty, but had yet to really prove himself.

You are so cute!! Only 45 miles ... wow we could have met and had some fun... I didnt stay at SOTB .... I just wanted to show everyone the crazy campiness of it all... the trip down was the worst part... but I have some lovlies to come yet...

Dont you adore Jenn and Jacqui ?? They are THE BEST!!

HUGS AND THANKS FOR THE INIVITE
firing up the grill would have been a TREAT!!

They are lovely gifts, that's for sure. Sandy had a grape tray posted one day that made me absolutely DROOL!
I'm on the hunt for bell peppers today, as a matter of fact. Can you believe Wal-Mart had not ONE green bell pepper the other day? I couldn't believe it! They had yellow and orange (at the low, low price of $2.48 each, mind you) but NO green. So today I'm headed to other places because we're having Kielbasa (sp?) sausage hoagies tonight and they're just not as good without the peppers! Wish me luck!

I got up early Saturday morning and the tv was on PBS and there was a lady painting hatboxes in a similar style as that lovely tray. It was facinatin'...I mean she made it look so darn easy!
I really like that horse shoe!
Lucky YOU!!!

I'm so glad that you love your tray! The horseshoe is too cute!
Have a fabulous week my friend and stay warm.

I love all three of those girls - Sandy and Jenn and Jacqui! I wish I had just a little bit of their creativity and talent.

I love bell peppers too...all the colors, but especially the red ones. Yum!

Sounds like a good time with your family. What great gifts, you lucky bum! I wish I could make stuff like. They are both so pretty. Have a good week! And I like the idea with your giveaway!

Ohhh subs...green peppers...onions...invite me next time! Ever heard of an Italian sandwich? Come to Maine and I'll make sure you get the best one ever!

Girl I don't know what happened to me and the rooster thing. If you would have told me years ago id have them I would just laugh.Now im in love.
Cute horse shoe!

You know I have a Sandy original... a rooster that I have hanging in my kitchen.
And J&J... they are so talented.
Aren't they all something else!

Hi hon, so glad you really liked your horseshoe, it was our first ever giveaway and we were soooo nervous!!! Sandy's tray is lovely, she is a very talented lady. Now you MUST see, hear me shrieking from downunder, MUST see Enchanted. Took Jacqui today for her b'day and have to tell you it's one of the best films ever. You will love it, trust me, we love bell peppers, subs with turley ham lettuce and onion, horseracing and Spanish rice too so trust me ok!! LOL Have a fan ready though to cool yourself down, Patrick Dempsey, three letters ...OMG... We are going again real soon, I may have missed some of the dialogue because of him!! Jenn and Jacqui

PS Thank you for my birthday wishes Sandi!! Jacqui xo

what a pretty tray! Sandi is so talented with painting.

How bout that snow? Pretty fun for one day. Thanks for admiring my new chandy. And of course I'm not an electrician...I just pretend to be one. Really, it's easy to change those fixtures out. Black & white wires back together & you're all done. Sometimes it gets complicated, but most of the time it's pretty easy!

Way late in the day, I know, but I finally got 'round to posting
8 Reasons Why It's Good to Be Me!

Thanks for thinking of me, it was fun to do! (Even if it did take me sooo long to get to it)

Sounds like the perfect weekend! I love your gifts from J&J and Sandi...so sweet!
Hugs,
Penny
p.s. raining and cold here today...

The tray is lovely and the horseshoe is so cute!! We've had a bit of chilly weather down here in Central FL and it's been like heaven :)

Very kind of you to divide your giveaway entries...lucky us!!

Love blue skies... I call them the Simpson skies.

It's always nice to receive gifts...makes you smile makes you laugh makes you just simply Happy ! :)