A New Look for the New Year 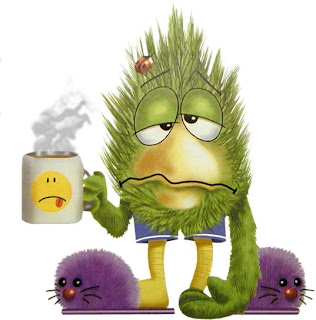 I've been talking about going to the Salon for weeks now and finally, here in a whole new year all together, I'm finally actually going to make it in. I spoke to Miranda today (after sending her an e-mail begging her to answer her phone) to tell her that there had to be some changes. I'm tired of hair hanging in my eyes causing temporary blindness, tired of hair hanging down my neck causing tickling sensations to move up and down my neck. I'm tired of the unibrow that has gathered forces and is threatening to take over my face. I want a new hip look, I want spiky hair that needs lots of mousse and can be done in under three minutes and still look fabulous. I want highlights put in that don't call attention to the gray that has suddenly decided to make an appearance. I want to do this before my birthday next Monday. I'm going to Evil Sister's on Sunday where I will be toasted and cheered and I want to look toastable and cheery. I know I will feel cheery, since it's the first time anyone other than me, has remembered I have a birthday in oh, I'd say about 15 years. Maybe more. Does Mac (WTHF) remember my birthday? Well, no. He sort of wads my birthday in there with Christmas and then if I should say something about it I get "well it was just Christmas". I heard that a lot as a child, too. I didn't understand then and I don't understand now why my birthday should be lumped in with Jesus's birthday. He should be able to have His own birthday and Christmas as well, is my point. And so I jolly well should, too. I know that my birthday present from Mac (WTHF) is going to be terrific this year. Evil Sister has sort of shamed him into it. The best birthday present I got last year was her arrival from New Jersey to live nearby. It's sort of a long lasting birthday present, you know? If I pick up the phone to call her, it's not long distance. If I want to go see her, I don't have to pack a bag or put animals in kennels. If I want to gripe about how I think the world is mistreating me, she doesn't have so far to travel to whip me into shape. Come to think of it, I don't really need anything for my birthday. Just having the people I love know that they are loved is enough. That and a cup of tea. And a new hair style and two eyebrows independent of each other. And highlights in my hair. Yes, it's going to be a pretty pleasant birthday!

Posted by Sandi McBride at 8:23 PM

In case I don't get a chance to say it, Happy Birthday on Monday! My birthday was on Thanksgiving this year...so I know about being lumped into holidays. I love getting mini makeovers on my birthday!! Have fun!
Penny

LOL Love the new pic... and of course you get a second chance you just need to come back and tell me if you want a pillow card or painting done... and which picture you would choose

A new hair "do" always helps, doesn't it?! I got one myself this morning. Yeah! I hope yours is just what you want and helps subtract years, which is what I want for MY birthday. LOL Have a wonderful time.

a new haircut is going to make you feel soooo special well atleast thats the way I feel everytime I get a haircut.I'm sure the spikey haircut will tie in with the likes of pink, kylie minogue and all of those cool people.Happy pampering yourself at the salon today..tell us all about it when you get back. And Oh you are so lucky to have evil sister live so close I wish my ES was close by tooo :(

Oohh can't wait to see the new 'do! The good thing about hair is even if you don't like it it'll grow out. Have a wonderful day on you birthday! Hope all your birthday wishes come true Sandi. {{HUGS}}

And yes, Dear One, we are *fluffy.* -giggles- But, the trouble with my *fluff,* is that it all shows in the same area. As in the constant 8 months pregnant look, both front and rear. Eeeeek! LOL.

And yes, I did go to Sissy (Kari at Just Livin' Large), and commented. Poor thing. I'd have throttled that B-R-A-T! If she was kidding back and forth with the kid, OK. But the kid should remember that she IS a kid. And not carry the crap on, to the next day. Yuck.

Oh and your lament about hair and eye brows is toooooooo funnnnnnnnnny.

I just had my 'do' trimmed yesterday and it feels goooood!!! Anthony does magic with my thinning hair. :-))))

Do we get a before and after picture? And I can so relate to the birthday in January. Mine is too and it does seem as if everyone forgets about it or I did get asked yesterday "What do you want for your birthday?" Well you've known me for 40 years and you can't come up with something you know I would love? ...... Whoops...how did this rant start? LOL Have a great day Sandi.

Me too! I want to see the new hairdo for sure!

One question: If Evil Sister talked Mac into getting you a nice gift, is she still Evil Sister?

(I am concerned about all of this "evil sister" talk since I may be getting that moniker myself. LOL!)

Oooohhh-la-la...Sandy...I can't wait for pictures of the new you and "do"....always a great thing to be a bit pampered no matter what day it is...it just does something for you inside and out!

Loved the whole uni-brow comment...and I think spikey hair will look fabulous on you...kind of sassy doncha think? I did the short Meg Ryan Spikey thing a few years back...and loved it...it was so EASY to fix...however, I'm in the mood now to have longer hair again...just so I can be lazy and pull er' back in a pony tail!

Have fun...and don't forget to take before and afters...

Happy Birthday Miss Sandi!! After your salon treatment is seems Jacqui will just have to go and make you a whole new image for your sidebar!! Happy Birthday special lady :) Jenn and Jacqui

Happy Birthday- sounds like a wonderful way to treat yourself on a day that should be all about you!!!

I'm feeling in need of a make-over too...sigh!!

Happy Birthday! And I need a little more info about the evil sister thing. I must have missed why she is evil. LOL