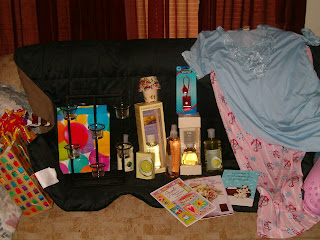 Last night Evil Sister and I were sitting in the den and I said to her, "I never want to live in a vegetative state, dependent on some machine and fluids from a bottle to keep me alive. That would be no quality of life at all. If that ever happens, just pull the plug." So she got up, unplugged the computer, and threw out my wine. She's such a witch."
Just a quote from long ago to prove that the Maxine in me is alive and well! I had such a great birthday party last night and it was like Christmas all over again. I don't think I've had a birthday party since I was sixteen. I have Evil Sister to thank for that. Her hubby was busy taking pictures and I was sure we were going to be posting them today when he called to talk to his buddy (Mac) and explained that his computer had kicked the bucket. He says it was when he was downloading my pictures that it just up and died. Okay, now I 've known my face to stop trains and a clock or two, but never a computer. I suppose the stress of such beauty was just to much for it to bear. So, his computer now resides in Mac's office where he is busily trying to repair it. When he plugged it in, he called me in to the office and asked if I could tell where the odd noise was coming from. I looked at the big silver box with it's skirt tail up and pointed..."from the computer?" I asked. He gave me one of those "sorry I asked" looks. I really couldn't tell what part of the computer it was coming from and therefore felt no need to complicate things. I was on my way to my computer so I could post the picture of my goodies. ES had prepared her famous "heart attack in a pieplate" (spinach quiche) a lovely seafood dip and artichoke dip. There were several types of crackers and then the cake. The cake had five candles on it and one the guests, Lenore, asked if it was for each decade and was I fifty today. In case you've forgotten Lenore, I adore you! So, I blew out the candles without having to take a second breath...it's wonderful what quitting smoking can do for your breathing. Didn't know I smoked? I once smoked like a chimney but it's amazing what an incentive having your chest cracked open can be. I haven't smoked, wanted to smoke, or missed smoking since December 2003, when I had my heart attack followed by triple bypass... (Oddly enough, other peoples smoke now chokes me.) So anyway, I blew out my candles and had a slice of the most divine cake, surrounded by the people I love. Thank you all for a lovely birthday memory. It's one I'll treasure. And I do mean all, my local family and friends and my Blogging Friends.

Posted by Sandi McBride at 9:51 PM

Just read it was your birthday over at Kat's and wanted to wish you a great birthday from a fellow Capicorn:)

So glad you had a splendid day...you deserve the best...and Evil Sister...well...she sounds like a great friend to have....even if she did throw out your wine...hehehehe

That's wonderful that you had a great time with the ones you love...well don't they say Life begins at 40 mmmm lets quote unquote that and say It begins at 60.

Oh, it sounds like your birthday was wonderful. I'm so glad.

Glad you had a great day and you sure got some pretties.

We are so happy your special day was a happy one hon :) Hair still perfectly in place? lol Jenn and Jacqui

Love your new haircut~
Good to hear you had a great birthday!

glad to hear you are doing so well after the life altering heart attack.

Smoke has choked me ever since I left home and avoided being around people who smoked. Both of our parents smoked..we begged them to quit for years... finally they did... just in time for one to die of lung cancer and the other horribly gasping for his last breaths with Emphysema. It will be 10 years in February since my Mom died and all I can think of still is how much I hate nicotine addiction.

I hope you had a wonderful birthday!

So glad you had a wonderful birthday and it looks like you got a nice loot. Keep celebrating it every day!

So glad you had a marvelous birthday party! I hope Mac can get the computer working! We want to see pictures!!
Penny