Mindy vs the Mob 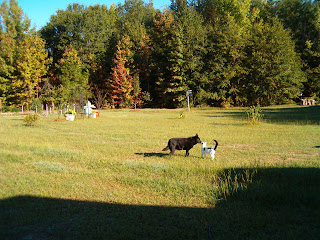 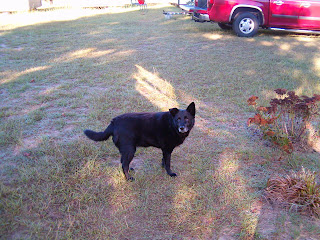 I love dogs...I have loved them for as long as I can remember. I love cats. (I'm sure that came as a huge shock to everybody). I have had the world's greatest dogs in my life and when I get to heaven (yeah, I'm sure) they're all going to be waiting for me. I'm not so sure about all the cats I've loved, cats wait for no one. If you want to tag along with them on their rambles then , you'd best hurry. Right now the only dog I have is our Mindy Lou. Mindy is one of those "not sure who her mama was, and her daddy was a traveling man" dogs. What kind is she? She's a dog. Nuff said. She's black. She has long ears, one stands up, the other flops down. She grins. Going on ten years old, her muzzle is white with age and she shows signs of laziness these days. She gets us up each morning so she can be let out to walk around the property and see what strange creatures have been out during the night, nose to the ground and at a fast clip, when suddenly....that's enough of that. (Now, I may have failed to mention that our Mindy is blind. I had her spayed when she was a puppy and she had a stroke during the surgery which rendered her sightless.) Her eyes may be blind, but her nose has 20/20 vision. She can find her way with that nose like no body's business. One other odd thing about her is that cats love her. ALL
cats. Love her. LOVE HER...When we moved here we brought our cats with us, the cats that she knew and knew and loved her and thought not a thing about it. There were two cats who had apparently lived here before we came along, and were they afraid of Mindy? Oh, no, not a bit of it. After we had been here a while I noticed that the prior owner cats we now called Wonky and CC, were following her. They were closely following her, and every so often one of them would rub against her and throw himself down in front of her. Strange behaviour for a cat, you might say. But it is exactly what my indoor cats do. They follow her, they "hug" her for wont of a better word. When they are wrapping themselves around her, purring loudly, it's all I can say, they are hugging her. Whenever she is out going walk about, she always has at least one, usually two and at times five or six, cats with her. She is greeted by Pinky Lee (he's white with black spots and the pinkest nose you've ever seen.) Then Wonky (his ears are deformed) and CC (he's a Maine Coon Cat) approach her and begin the ritual. Purr hug, purr hug, purr hug...and escort her to the yard. When she gets into the yard, the rest of the mob run to meet her. The kittens, George, Ociecat, and Barney lead the pack, with Stranger bringing up the rear. Now Stranger is one of the newer ones who showed up for supper one night and forgot his way home. (I have several who have that claim to fame.) This is the one cat that Mindy could lose her temper with. He is a stalker. And he is annoying. Mindy Lou can not take a step without his escort. He runs ahead of her to wait for her. If she changes course, he changes course. Mindy has put in for an OOP (Order of Protection) but like most men, he walks right through it. I have stamped my foot at him, clapped my hands at him, everything short of throwing things at him (which I refuse to do...maybe I should turn the hose on him.) Cries of "Hey CAT LEAVE THE DOG ALONE!" can be heard nearly every evening. You know, I would have thought this was just a fluke, but last week, Peanutbutter brought home a guest for dinner when she returned from one of her trips...she brought with her a lovely grey wonky earred Maine Coon. At first, when I saw this gray fur ball wrapped around Mindy Lou, I thought it was OUR Wonky...then I noticed only one ear is deformed, and his coat is a darker gray than our own Wonk. You know, I can almost hear the conversation between Peanutbutter and the new cat..."don't mind the big black cat, she's had an identity crisis ever since she lost her eyesight. She thinks she's a dog. Yeah, she's blind, we're her eyes."

Posted by Sandi McBride at 8:21 AM

Labels: Mindy vs the Mob

That is the sweetest story ever! I got teary eyed (which happens much these days…another story) when I read Mindy was blind. How fortunate of her to have all eyes on her, with her, and for her!!!
Is that THE KINGDOM Mindy gets to walk around otherwise know has property to you???
Isn’t she lucky!!
I lost count of how many real cats and adopted ones you have, no wonder you were pushing for dry food!
Felix is the only cat in my neighborhood who willingly lost its way and followed me home. There are at least two more I see every now and then. I’ve fed them often, but they are never punctual for the next feedings (I go for days or weeks without seeing them and the food I place outside goes to waste).
The other mystery cats fight each other and it makes me scared to bring them in. One night all three of mine sat on my window ledge and watched the two go at it. It was vicious and that day I realized not all cats are cute little fur balls. Still I don’t like seeing them all deformed and hungry.
Not trying to show my fellow cat lovers up or anything but two of my cats follow me everywhere I go from the moment I walk into my front door, when I lock myself in my room without them, they whine all night long to be let in. The also love to sit in the kitchen and watch me cook! And they all come when called by name.
They understand, down (from the kitchen counter), No and stop! No I didn’t train them. I might be delusional though since we are talking cats here.

Oh poor dog she must really think she is a cat!

Ah Mindy sounds like a lovely dog! I'm glad that you're a cat and a dog person Sandi! I don't know why! Hope you are having a slightly cooler day today!xx

Mindy looks so sweet. We had a black lab when I was a child who loved our rabbit, and vice versa. They used to cuddle up and the rabbit pined for the dog when it wasn't there. I don't know many dogs that would tolerate cats (and vice versa!).
Cathy X

What a nice story, I love dogs & am not much of a cat person. Your MIndy Lou sounds like a special member of your family.

Awww. You made me miss my puppy. I grew up with dogs and my last dog growing up was Pepi, a little chihuawa(sp?) who was the runt of the little, that's why I choose him. Since marrying my DH we've been a family of kitties.

What a wonderful story - I needed that this morning!