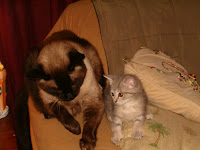 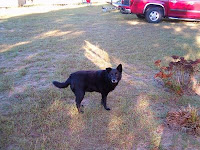 MindyLou for VEEP...a vote getter by golly! AGE IS NOT AN ISSUE

He's a tawny seal point Siamese with a passion for politics. He is running on the Democatic ticket and can't abide democratic wannabees or Republicat flibberty jibbits. His theory is every cat for himself and to hell with the mice. If it's his mouse he sees no reason to share the bounty with any other species or even with his own kind. Birds need not apply to sit on his cabinet, though they can be canned and in his cabinet, no problem. While he is not into dogs, per se, he is running with a dog as his Vice President. She's a real bitch, so don't mess with MindyLou. You think Hillary was a tough nut? You ain't seen nothing yet! We're not sure how many votes Pye can anticipate, most of constituency can't drive, nor do they have thumbs...but he feels that he has a good chance against the weiny competition that's set up against him so far. Why? Because he never claims to have passed any law right by himself, changed any condition all on his own or to have scratched his way up from kittenhood without the help of the people who actually raised him. Yes, he figures he stands a good chance. He just needs the vote of the people in blogland to get him to the pinnacle of popularity. A vote for Pye is a vote for honesty!

Pye for Prezzydent
Posted by Sandi McBride at 8:03 AM

LOL, He has my vote!
Hope you have a great day!
Blessins',Lib

Got my vote, too.

Give him my vote!
Guy (chief of Police) is sending a big lick too!
Carol x

That's a cat for you!~ They already run the country, in their own minds, I'm sure!

P.S.:
Thank you for nominating my blog over at David's "Authorblog"! I really had fun playing "food blogger" for a day's post. ;-)

He'd probably do a better job that the humans!

I'm back from Blogstock and then from our time in St. Louis visiting family. I have some catching up to do...

Well, by jove, a vote for Pye from here!!

Have a happy day!

You are so funny...you know...maybe Pye does need to be put on the ticket...you may be surprised as to how many folks may trust him...based on who is running and all...just my humble opinion...again.

Loved your comments on my post...and I DO agree that our lovely Miss M. is to stay a Miss for the rest of her life...no MRS. for her in the cards...and I know we did the right thing...doesn't mean I like it...but I do know it is right for all considered. DANG...I hate it when that happens...you know listening to your "inner" voice and doing the mature thing...geez...that's just not my idea of fun!

Blessings friend...when do we start working on Pye's campaign posters??

Where do I buy a bumper sticker?

PYE AND MINDYLOU. WRITE IT IN.

Pye gets my vote, Sandi! And plenty others I'm sure. Don't worry about His constituency not being able to drive or having thumbs. The bus line will take them to the closest polling place or they can vote early at one of the alternatives. And, there are ballot readers for those who need help and can't work the machines. :) Pye'll get 'lected for sure! You gonna change the name of the place to the Pyehouse?

I really liked visiting your site. I liked the quotes and many of your favorite movies.
xoxo Nita

Question for you fab gardeners....

I have huge huge zucchini plants with tons of flowers... but the whole head is falling off... almost like somene has cut them including the place where the fruit would come from ... any ideas as to why this would happen and how I can stop it?

I have a bird net on the plants... could that be keeping the bees from pollinating? trying to keep the neighbors cats and a few other animals out of it... perhaps I could just put the netting on at night?? would that keep the bees from doing their thing?

I will take a pic and send via email...

Thanks for the help... let me know about the netting

wonder why you are having so much trouble getting in?

Sandi,
That made my night. I love your sense of humor. Count my vote in!

Thanks for the visit,Sandi. It is so nice to meet you. I have read back through a few of your posts and I love the way you write. Loved the post about your father. He sounds like a very special man. Please visit again!

What a beautiful cat. I used to have one like that.Missed you.

Pye it is then! Glad the piri piri experiment went well, and Mac gave it the thumbs up!

I love it! I had a pure lilac point named Sushi (my icon). I love all cats but have a super soft spot for black cats and siamese cats...actually my black cat is siamese and burmese, and my white cat is a siamese as well...you cant beat their quirky purrrrrsonalities!

PYES'S YOUR GUY! Hes got my vote

ROFL! You nut! Loved it!

You can count my vote in for Pye, but I would love to hear what he plans to do for his constituents - I wonder what are the most important things to them - probably more mice!!

Sandi... I just sent you an email with five attachments ... subject zucchini... check your spam folder just in case..

Thanks for the help

AND CIAO FOR NOW!!

Laughed out loud at this: "Republicat flibberty jibbits. His theory is every cat for himself and to hell with the mice."

Hi there! My Mom and Sherry left this morning so I'm back at blogging again. Yippee!! (I miss them already though.)

Pye has my vote and Miss Daisy's too!

Trying to catch up on my blog visits...Read your canning tomato post. Pressure cookers scare me too!! Hey, how do you make tomato gravy? It tastes great, but I have no idea...

And I bet he never claimed to have invented the internet either. :)))

Sandi, thank you so much for your Sunday breakfast which I have really enjoyed sharing with you. Earl Grey with milk & no sugar would be lovely, and I can definitely be tempted by that scone!

Pye has our vote under one condition, that his se-cat-ary of state be our cat Sam.

Yes I do agree not having the opposable thumb might bring them down--in my old house we had french door handles, so Sam would hop up grap push the door handle down and then go to the bottom and push or pull the door open--in our current house with regular door handle, he tries to mimic us with the turning of it, but he just can't seem to understand when we tell him he needs a thumb:)

Good luck on the long and tedious campaign trail

Hi, Sandi! Thanks for stopping by my spot. I am thinking Gidget would be honored to consider a seat in Pye's cabinet... even Secatary of the Treasury!

And her dress is beautiful.

And she does not look like she's DEAD, as my husband said!

Got my vote, that's for sure! He's a real keeper--in fact, they ALL are!

I have discussed this all four cats at length.
They are unanimous in their decision that they will vote for x(piex) sorry, Pye, any day.

That should have read "pie" with a x( and )x around it as I can't do the crossing out here in comment. But I got my tags all muxed ip. I mean, mixed up. :(

Awwwwwwwwwww she is so precious! I love that little kitten :)