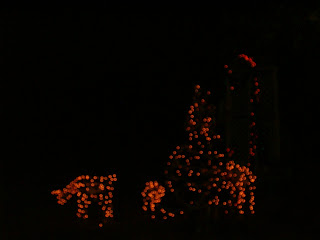 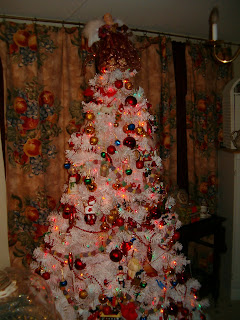 So, after effects of the meds I take weekly (on Friday night) hit me hard this a.m., but feeling like warmed over death is better than I felt two hours ago. Thought I'd post the pictures of the tree and my outside decorations...I don't have the strength to try to take on one tenth of what Kari and Randey do, but giving that we don't trust each other on ladders, Mac and I feel it looks pretty darned pleasant! As I was putting the ornaments on the tree so many memories came flooding in. I had the wooden ones for when the boys were little, the ones that couldn't be broken. I had about 30 of the small nutcrackers that I bought in Harrods when we lived in England. I gave so many away to friends and family who visited over the years that I only have two left. They are both handicapped now, both having lost their lower legs, one on the right one on the left. I suppose I could make one complete one, but don't like the idea of using one of those brave wooden soldiers as spare parts. Best to have two injured ones than one whole one. I have one glass baby doll who now lives in the china cupboard out of harms way. Trees. They're so much more than what we see.
hugs and love from

Posted by Sandi McBride at 7:30 PM

Oooooohhhh, cool! Is that gumdrop garland I spy? Pretty, pretty, pretty! Gosh, I love Christmas sparkle!!! It just plain makes me SMILE!
Merry Christmas! And thanks for the card. It was our first of the season!

Hi Sandi, oh your white tree looks gorgeous, great choice :) We have enlarged the photo so we can see all the little details, love the angel on top, she's beautiful! Hope you are felling better hon, a big hug from us and we'll whip you up a special Eggnog :) J & J

Sandi
Lovely tree hope you feel better today.Have been shopping to Borders with a 25% off voucher got some great things

It all looks beautiful! I don't know how you achieved the look on the outside if you weren't on a ladder.

Sorry that you've not been feeling well. Is this a weekly reaction to the meds? Yuck!

I loved reading about the nutcrackers. Perhaps you'll make it back to England one day and find more. Even the broken ornaments have such special meaning because of the memories. It's not even about the ornament itself anymore.

I think it's all just perfect. The memories make it more so, don't they? I'd keep the battle scarred nutcrackers just as they are, too.

Your beautiful white tree looks so lovely all decked out for the holidays! All the sparkle is making us giddy with holiday spirit! thanks for sharing!

Remember me? Yep, I'm the one who hasn't been by for a visit in over a week. Sorry. It's been wild and crazy around my house, plus I've been out of town, but I'm home now and sooooo ready to catch up on my blog reading. I've sure enjoyed visiting here tonight. Finally!

I went back and read all your posts I've missed and it's been fun seeing what you've been up to.

I LOVE your white tree! So beautiful!

Oh Sandi this takes me back.
My Mum had a gorgeous white tree and it lookded very much like yours when decorated. It is lovely.
I hope that you are feeling better today.
Hugs,
Carol x

I like your white tree! I know how meds can zap you. I think you are doing great!

Hey Sandi, So sorry you are feeling yucky and hope you are better today. Your tree looks fabulous. Show us some close ups of the ornaments. :) Feel better! xo Lynn

Sandi~ I love the pictures of your tree. You aren't the only Sandi who can't keep up with Kari!

Y'all were talked about at the meeting of the B's... were your noses itching? Good Things of course.

We think your tree is wonderful....

What agorgeous tree!! I love white trees. I hope you are feeling better.

Your tree looks lively and ready for celebration...now time to wait for Santa to come down the chimney ;)

Lovely! Those soldiers are obviously old campaigners & deserve to be on your tree each year!

Your tree is lovely. My great, great aunt Pat always had a white tree and it was always beautiful. My mom missed it so much that she bought herself one a few years ago. They are so different, I love them!!