I was snoozing ever so gently this morning when I felt someone looking at me. I was swimming hard for the surface dragging myself up from a semi coma to the dawning of awareness when I heard Mac say "when you're sleeping, why do you breathe like that?" You know, I had to struggle to choke out the words "breathe like what?" "Well," says he, " like little puffs of breath and then this little...I don't know, like a giggle". He's whispering, and I'm wondering just how long he's been awake listening to me breathe. "Are you alright?" I asked. I mean, I am not understanding this at all and he admits he does it often. "You don't snore," he tells me. Now I'm sure this is not earthshattering news to most people, but it was vindication to me. You see, he does snore. And loudly. I've heard the term buzzsaw used to describe some snorers. Try jackhammer. In your ear. In the middle of the night. And then that sudden little jump, and I know he's having that falling off a cliff dream again. I've told him over and over again to try to sleep on his stomach, or on his side...but he swears to me he doesn't snore. He knows he doesn't snore because he sat up all night one night and never snored once. I kept telling him I was going to set the tape recorder up to get my proof, but you know there is just no convincing some people of the truth even if it's staring them in the face...or playing loudly in their ear. But by this time I'm wondering just what time it is. I look over to the clock to see that it's 5:00 in the morning. I patted his hand and prepared to snuggle back down into sleep when I heard a noise at the closed bedroom door. It got a bit louder, accompanied by meowing...indoor voice meowing...Pyewackit was whispering "let me in, I'll be quiet and won't let the others know I'm in there with you..." Then quiet. Then a bit of bumping at the door. Then a scurry of feet. In the nearlight of morning I see one brown paw coming beneath the door and reaching upwards. I hear a deep rumbling of laughter and Mac says "I think he ran to get his screwdriver set...sounds like he's removing the hinges." And it dawns on me. There's no wonder I'm so tired...I haven't slept "in" since 1989. It's the bedeviling men in my life. They give me no peace. My attention is required all the time. But it's a warm feeling when I stop to think about it, one lying watching me sleep, the other trying to remove the obstacle that separates him from the person he considers his own. It's love. I've decided that I'm pretty lucky anyone cares how I breathe when I sleep and begs for the door to be opened. Like Pye, I can always grab a nap later. 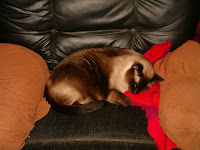 This post, as I was reading it, is a "smiler" because the more I read, the more I could feel the smile spread across my face. Very good words, my dear.

That's so lovely, Sandi. It took me back to sleeping with my grandmother. She snored lots. She knew it though. My mom snores too and was diagnosed with sleep apnea so she now wears a CPAP to bed. But you know, I slept next to a snorer for 7 years of marriage. It becomes a sort of music to your ears as you eventually find you can sleep through anything.

May Mac's snores sing you to sleep for many years to come.

Sandi this I have to say is probably my favorite post ever! What a sweet way to start your day :) Its nice to know your loved isnt it?
Congrats to you for having not one, but two great males in you life!

I sleep with ear plugs every night. Why? Because hubby snores (loudly like Mac LOL) and Miss Daisy moves around so much and smometimes scratches. But like you, it's nice to have them by my side. I wouldn't want it any other way.

Sandi, that was a beautiful post. I agree with jeni that its a smiler - I grinned all the way through, especially at Pye getting the screw driver set to get in through the door. I had a much loved night last night, Zena woke me up twice because she wanted cuddles or wasn't happy with where I was lying! I do so love that feeling of having her cuddled up next to me though.

Sandi you get that GPS. NOTHING would make me happier.I know it's a dream,but girl we would have fun.
I wouldn't even care if you whistle when you sleep. My mom does that and has for years.It is kinda like a little blow..I think it is so sweet I love to watch her also. The only difference would be when my Muffin Kitty is ready for you to wake up she will jump up and pounce on top of you=) Have a great Sunday.

Hi Sandi,
What a cute post. Hope you have a great day!
Blessins',Lib

And oh yes Sandi, all desks my husband makes, have a secret compartment in them. Even the chest or side-board he made for son and daughter in law, has one in it. :-)

Oh Sandi,
there I was, already chuckling over your other puns, when I reached the "haven't slept "in" since 1989"-statement. Do I need to point out where my tea went? *rofl*

P.S.:
Should you ever want to really know, well should "he" ever want to know for certain whether he snores or not, let me know. A friend of mine is a sleep researching psychiatrist, a bit up North from you. Your husband may be an interesting subject. ;-)

I'm told I do the "puffs" too...lol! Unless my allergies are in full swing at which time I do actually wake my own self up with my loud snores!

Ain't it nice to be needed?

Have a wonderful Sunday ♥

Sandi, I love the things that you choose to write about. I'm watching very closely you know. This was a warm and sweet offering...thank you.

So sweet..and funny. We would be awfully lonely without all those little tugs on our attention. thanks for your prayers. It's not a serious health problem, just annoying and time consuming.
hugs,
Holley

Great psot Sandi! I loved this story. My hubby doesn't snore but my kitty does decide to play in the middle of nite and ram the bedroom door. We both just wake up and say Cleo is at it again. One of these days it's going to be a thief and we'll be thinking it Cleo. LOL Hope you had a good weekend.

Nice to find this blog, especially at is the only one I've seen that has a name like the actual "inaholdingpattern" name of my blog.

What a sweet post. It's great having two men in your life that want to be with you even in the morning. I kind of tagged you so go check it out. Love ya!

Surprise!! It feels like an eternity has passed since we have flown by! My gosh we have MISSED you our darling Sandi and your fantastic posts. We are home for a short while so have some time to read all your posts properly and have a nice cuppa, like chatting with a friend at the kitchen table :)

Mac is so sweet. true longlasting love my dear :) A little secret, hubby snores so loudly he keeps me awake so I toss and turn most nights! And our dogs snore in their baskets, Miss Penelope more so than Hamish!!

We will fly by again when we can but know that we are thinking of you with much love. Now we are off to read your posts!

Hi Sandi
I know all about snores as DOUGAL sleeps under the bed and HAMISH on my feet if I allow and they both snore and make funny noises in their sleep!!!!!!!!!!!! I am surprised that you can't hear the husband in USA.I woun't be without as I know all is well with the world when they are there!!

I was grinning like a "cat" when I read that bit about not sleeping in since 1989. LOL...I awake quite often to find the cat staring at me. :) Lynn

Sandi, I agree with you. You are one lucky woman. And how beautifully you've expressed it. It's the kind of post that makes us all count our blessings.

Hugs to you and Mac and Pye. Pyewackit--a great name!

Aaaawwww! I wish everyone had that same outlook. I loved reading this post.

How nice to watch you while you sleep, you're a lucky girl to be so loved.
My H snores loudly & wakes me almost every night. He snores & snorts & blows bad sleepy breathe all over the room! Sometimes I'll go sleep on the couch.
ah well, that's life,
Hugs, DebraK

Oh you do make me laugh Sandi!

And how I'd like to know how men think they know they don't snore? How can they hear themselves when they're sleeping??

I love what Mac said about Pye going to get the screwdriver. lol!

What a great picture of the sweet boy!

Awww, that was just sweet. Your men are pawing to be near you. I don't snore either. My hubby does. I feel your pain.