Sunday morning came in bright and sassy, nearly everyone was busy preparing for Church and the Superbowl, in that order. The quiet in our neighborhood was suddenly and shrilly shattered. We heard yelling and so Mac went to investigate as I was still pajamaed. He came back to tell me that one of the neighborhood kids thought she heard someone yelling for help in the woods. She thought it may have been a child. Her older sister allowed as to how she may have heard something, too. So 911 was dialed and my brothers in blue arrived enmasse. People in the neighborhood, including Mac, quickly formed a search team to go down into the woods to see if there was anything to the story. Now, it is a trick to get through that tangle of briars and roots, grapevines and tree limbs. Hunters are back there all the time, and why they haven't killed each other off yet is beyond me. The woods are deep and dark, and not my home. The furbies stay down in their depths most of the day, climbing and playing, hunting and stealthing. I was standing in the side yard talking to our neighbors when this 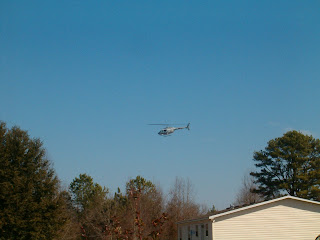 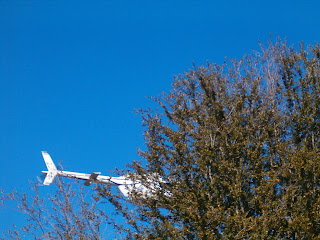 broke the silence that had finally fallen over the neighborhood again.

We watched as Batgirl, the Calico furby, tore up out of the woods as if her tail was on fire and hit the front porch door and actually pounded on it with her front paws for someone to let her in. Okay, and here comes the John Candy line from the Great Outdoors, yet again...Bird...hhhh...big bird...hhhh...big bird chase me....hhhh....(She hadn't been back outdoors till this morning, and then she went warily, as though that huge creature might still be hovering in the sky out there, just waiting on her.) I ran in and got my camera so I could get a few shots of my (former)people at work. There was no one found, and after hours of searching, all the gear was packed up, all the volunteers went home to prepare for the Giants trouncing of the Pats, Law Enforcement, who had gone to each and every home on three roads to get names and ask if anyone was not home that could be lost in the woods, went on to other calls and Sunday was once again quiet. Pointless waste of time I hear some of you saying. Well, actually, no. The neighborhood now knows that if something awful were to happen, or if someone lost needed locating, help is only a 911 call away. That's a comfort in and of itself.

Posted by Sandi McBride at 7:32 AM

Hi,
Hope alls well with ya'll .I'm trying to catch up with everyone ,and get updated.
Hope you have a great day,
Lib

Jesh what a wake up call on a tranquil Sunday. Like you say though the neighborhood is alert. LOL about the John Candy reference.

Wow! And yes, may all learn a good lesson.

Your poor little calico; they're so paranoid on their best day...hope that she calms down.

Sandi, it is always to be safe then sorry. That was quite a day. Thanks for sharing, Anna :)

Oh Sandi, I read this holding my breath! Thank goodness nothing awful was found! But I like your perspective on the whole incident! Hope you are well-we have meetings this week about the dreaded job situation, so I'll let you know how it all goes!! Take care!xx

How true about knowing that 911 and those emergency services are in place and those people give willingly of their time and energy to make sure no one is endangered by whatever may be out there. Just think how terrible it would have been, had there really been someone lost, hurt, ill, injured and if no one had taken the time and effort to do the search mission too! Much much better to err on the side of safety, isn't it? At least all can rest easier after the fact.

Wow, what a wake up call. Nice to have such an alert neighborhood!

Wow.. I bet you wer going nuts. I know I would have been. Hope all is well and nothing was left unfound.

What an exciting day you had. Poor kitty though, you can't blame her for being so afraid.

Its really nice that the search will happen without any real proof or report of a missing person. Good deal! You seem to live in a very nice place, Sandi!

Hugs and rubs for the kitties!

That's scary hearing calls for help and finding nothing. Sure hope it really was nothing. Sounds like you live in a wonderful neighborhood. Funny stuff about your fur baby.

What an interesting day, but it's better safe than sorry!!!

I'm so glad that everything was ok, I should imagine that when you worked it was with an awful sense of trepidation that you went out to those calls.