Dear Santa, May I have a Word?

So if you recall, last week I was talking about the big book of computer info called "The Complete Book of Computer for the Complete Idiot."  And as you recall it's main use is as a door stop.  A $69.99 door stop.  Well, after I had learned what I needed from it, I sort of wore out my EMachine.  Everyone was after me to get a laptop.  I am not sure what I had against it, but I was not a happy camper with a laptop.  I wanted what I was accustomed to, that tall tower and big a** monitor that took a special computer desk to sustain its' weight.  So in 2008 Santa did the unthinkable.  He brought me a laptop and I sort of pouted about it.  Okay, so I just out and out refused to even try it for the first week it took up residence.  Then, when the EMachine refused to cooperate at all, I opened the laptop and began to try it out.  I hated the little pad that replaced the mouse and Mac heard me all the way down in the garden..."I HATE THIS THING!!"
It's a lucky girl I am, because Mac knows a good bit about computers, he's built his fair share, including all the ones we have used.  He built my EMachine.  He came in and went into his office and came back with a mouse.  He plugged it into the USB port (now I have to be honest and tell you that I had written down UBS till Mac corrected me...it stands for Universal Serial Bus).  The computer picked it up as new hardware and installed it.  I hesitantly approached the computer, and placing fingers on keyboard, began to type.  I used the mouse for the things the mouse has to do and was in love.  Oh yes, I love my laptop.  I was on that laptop hours at a time.  By the end of it, I had written a book, and had it published. Also, I was not the only one who loved that laptop...Sonny our Russian Blue loved it too.  When I wasn't on it, I'm afraid he was.    And then something awful happened.  Sonny and I loved my laptop so much that we actually loved it to death.  Yes, we killed my laptop.  I don't know how we killed it, but suffice it to say that it became overheated and decided to blow itself up.  Sigh.  I handed it over to son Michael who had it for several weeks.  "Exactly what did you do to it," he finally asked.  That was when he returned it to me as being a hopeless case.  I think it should be purrfectly clear that Sonny has denied all culpability in this.  He claims he was in his cola box, and has the proof.   So right now I am using Mac's laptop and he has ordered me to keep it closed and turned off and Sonny's presence is not needed upon the case.  Poor Sonny.

So, this is going to be my letter to Santa.  I'm sure he reads the Chronicle...after all, he has letters to him published in it every year.  So here goes...Dear Santa, all I want for Christmas is a new laptop with cat repellent implied...I've been pretty good all year if you don't count the mornings and evenings...thanking you in advance...Sandi  So, what do you think?  I'll let you know if he agrees that a new laptop is in my future.  Cross your fingers for me, will you? 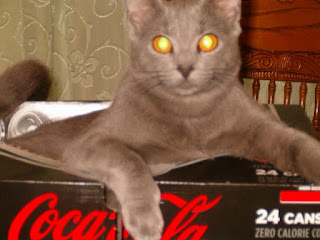 Oh I love a turn of the phrase! LOL

Yes, I will certainly wish with you for a new laptop. As for me, I'm sticking with my big a$$ tower. ;>

Aw, come on. Everything is better with a cat!

I love how innocent Sonny looks...and so gorgeous.

I understand about the laptop. I was resistant for a long time thinking it was not a frugal move for me. But once I started using mine in Texas last year.....all I can say is wow! We have a tower in the house for general use but I never ever touch it now. My laptop goes with me most everywhere.

Here is to hoping 'Santa' listens with a wink.

I like my super big screen that goes with a tower! Is great for 'painting' my graphics, and mush kinder on the old eyeball with Boggers who WILL use minute type faces and pale inks on their posts.

hope you get your laptop...my cat likes to sit between me and my laptop and watch the screen...occassionally we get in fights because he wants to comment as well...and that is when he needs to go outside....

Oh yippie! If Santa is able to find you one with cat repellant, please let me know! I desperately need one myself. I need a specialty brand though: Siamese Cat repellant. ;)

Don't know if you've seen these Simon's Cat cartoons floating around but this one made me think of your post. Enjoy!
http://www.youtube.com/watch?v=BWIPZvwcnX8

I wonder if I've been good enough to get a laptop? I sure hope Santa brings you a new one. I loved this post!!

I hope you get one.....Wish I lived close enough...I am a laptop collector..at least thats what my kids say...I have them everywhere...

I love the laptop but unfortunately we need a new one. Not sure that Santa will be stopping by tho'.

I'm using my second laptop...the first was a casualty of the April Fury...Honey Bear and I both have one and can usually be found with them in our lap whenever we have time to sit down.
Mama Bear

I send an e-mail to the North Pole immediately.

I converted to laptops a few years back. I have been through 2 and currently on third. Yes, they are prone to overheating and simple do not like anything inside their guts from hair to coffee.

I solved the spillage/dust/air with a overlay on keyboard and a huge set of fans beneath. However, A repairer of laptops, said turn them off when not in use. They all will overheat.

Hope Santa has an extra to stuff in his big red bag.

I surely do connect with this sigh

Well, I know you've been a berry good girl, and I'm sure Santa knows it also.

My brother bought my sil a laptop last Christmas; and like you they eventually got a "mouse" and now she loves it!

Have a beautiful day!

So far, my computer -the tower or the keyboard -have not become targets for our little cat, Pearl. But virtually everything else in the house has been graced by her presence with her latest discovery being the keyboard on the Hammond organ that was my late aunt's and which thankfully, is unplugged or we would be getting all kinds of weird music at all hours of the day and night otherwise I think, if Pearl had her way.
Here's hoping you get a new laptop with cat repellent! (Just to keep it away from that item, nothing else though. LOL) Peace!

wooo hooo! Go for it! I am hoping for a lap top this year, or a tablet or even a kindle fire...something more portable than this PC! ;) If not, I think the New Year Fairy might bring it, I spotted her once, she looked a lot like me!

Oh, what a fun read.;) I have used many laptops to death too, but it seems that my latest one, a mac ibook has what it takes to survive the usage - have had it for almost 3 years now.;) And Sammy (the cat) seems not to prefer lying on it, so it might just work for you as well.;)
Hope you had a lovely Sunday,
xoxo

...just look at those eyes. i ain't gonna argue with that cat! *grin*

you know it depends on what I am doing as to whether I prefer my laptop or my desktop. I would be lost if either of them went, so I'm not sure what I would do if I had to pick just one?

Hah! I love it!! I had a similar pout about the iPad a while back... yeah, thank goodness the husband knows what I need better than I do ;-)

I bet Santa will be sending a new laptop your way. I just got a new one for my anniversary. My old one still sort of works. The hinges are broken and I have worn the letters off the keys. The puppy called Toni loves the computer a little too much .... hence the broken hinges.

Nice blog! Visit mine and be a follower!
http://elpalpite.blogspot.com