A Ghost Story from England

It's that time of year when I share a ghost story with my readers.  I look forward to Halloween almost as much as I look forward to Christmas.  We never had "store bought" costumes as children, we made our own.  Our imaginations went wild with the many ideas for disguises.  And we always ended the night with a good ghost story.  We still do.  I would love to regale you with a ghost story that is true in every regard.  It took place at our hotel, the Tudor Lodge in West Ruislip England .  The month was October, of course.  The year was 1978.
The Tudor Lodge is a lovely old hotel that started life as a manor house, then a hotel, became a Hospital during several wars, including WWI, then back to a hotel again. We knew we were not going to be put up in a 4 star hotel, but I've read some of the recent reviews of the Tudor Lodge and I hardly think it deserves some of the awful comments that were made about it.


The staff ,when we were there ,were always helpful and eager to tell us about the history of the place. That is what I found to be the most enjoyable, the history of the Tudor Lodge. We had a wing of the hotel to ourselves, with two rooms and a set of stairs leading down to the dining room. They only served breakfast, but what a plus that was for a young family getting kids off to school. They offered several selections of cereals, including Wetabix, which our older son, Wallace, really liked. They had Marmite, a bread spread that apparently is an acquired taste (which we never, any of us, acquired) and the best bacon in the world. The first time I asked for bacon and eggs and they brought out these lovely scrambled eggs and two slices of what looked like wide thin strips of ham, I wasn't sure they had understood my order. I was assured by the young lady who delivered the plates to the table that this was, indeed, bacon. The toast, made from Mother's Pride Bread, I believe, was also bigger than the slices of bread we're used to at home. So, the boys had a good breakfast before leaving for school every morning and we were quite happy with the hotel accommodations.
Every night, we would watch the news (hoping for good news on the hostage situation) then we'd watch the BBC. One of the first shows I found I enjoyed was Dad's Army. But Mac kept saying, "what did he say?" and I had to translate. I work with accents very well, I grew up with Ricky and Lucy on TV and at home...my dad is from Ecuador as most of you are aware and so his attempts at English pronunciation rivaled those of Ricky Ricardo's.  My mother was every bit as zany as Lucille Ball with a Southern Accent that needed a knife to cut through.

So, I would translate and Mac, finding the line funny would laugh. The boys didn't have to hard a time picking up on the language, it was after all, basically the same as the language they already spoke. But more on that later. One morning after getting the boys up for school, Michael was telling me that I didn't have to check in on them in the middle of the night. I told him that I hadn't been and immediately came the description of the lady in the long white dress whose hair was put up funny (being no hair dresser, my hair was often "put up funny"). So, I told them maybe it was someone with the hotel. 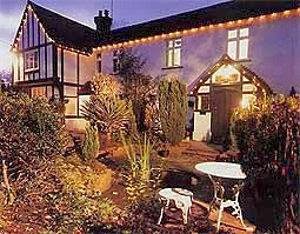 I was sitting in the dining room enjoying my coffee and the Daily Mail after getting the boys on the bus. One of the Hotel managers came over and asked how everything was going, if we were enjoying our stay and what had I planned for the day. I was gracious in my compliments because frankly, they were gracious hosts and I was enjoying my stay quite a lot. I happened to mention that Michael had seen some lady checking in on him and the lady's face went absolutely white. She told me that there were stories about a Nurse who haunted that wing of the hotel (remember, the hotel had been a hospital in several wars) but she had never actually seen her, just heard the stories. I wondered if she was concerned that we might think someone was sneaking in the room at night for some nefarious reason, but that really wasn't the case at all. I knew that everyone who worked in the hotel knew that we would be there for several weeks and really did think it was just an employee checking on the children. (This was, of course, before the disappearance of children became an everyday event to scare every parent world wide.) But later on, I found that the other employees were eager to talk of the "Lady in White" with someone who didn't appear to think it was a laughing matter. A couple of the ladies had actually seen her in the room the boys slept in and were never frightened by her. She always seemed to be bending over the beds as though adjusting blankets, according to them. So I decided I was right all along, someone was checking on the children, making sure they were alright. I can remember standing in the middle of the room and looking around, hoping I would see her. I told her thank you, though...you can never have too many eyes checking on the welfare of your children.  I'm pretty sure  she heard me.
Posted by Sandi McBride at 10:16 AM

Now I find that chilling. You do have a way with a story!

Well, you know I've read this a few moments ago, but Sandi I do believe you're quite the story teller!

Sure hope you're over that flu bug.

A benevolent ghost....how happy she must have been to have children to look after.

What a story! Perfect for Halloween and even more so since you experienced it. Unfortunately while growing up in France we did not have Halloween, we had Mardi Gras to wear costumes, but it was not the same.

What a great story. I always enjoy your stories both for content and how good you are at telling them.

bwahaha...smiles...at least it was a good ghost eh? i grew up with a graveyard in the back yard...saw a few unexplainable things in my day...also voices that had no one attached to them....

Thanks for this story! I love it. I love this holiday too--and making costumes. Our midnight tales come down to the Bela Lugosi movies on Netflix. Works!

That was a good story! Always need extra hands to look after children.
Marmite is delicious! You either love it or you hate it.
Maggie x

Always like to hear stories of good ghosts Sandi. :) I love Halloween too and all though, living out in the country, I have no trick or treaters or passer bys, I still like to decorate for Halloween. xoxox