The life of a box 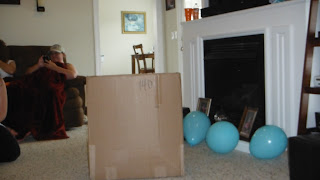 Our grand daughter celebrated her 14th birthday this past Sunday, but her party was held on Saturday, the 27th.  We happily drove to Coward (SC) with the large box containing her present from us.  She is turning into a girly girl and is changing her room decor to a beach theme.  We found the perfect comforter set for the new look she is trying for and knew she'd be happy with what we had chosen.  She is our only grandchild thus far, so nothing is too good for our Princess.  I gladly tell everyone that she is a child of her own age, she was 13 going on 14, not 13 going on 30.  She doesn't wear a ton of make up, dresses like a young teen should, jeans and tees...just what an anxious grandparent would want, you know? So we have this large box and all the way down we talked about how when she was little (wasn't it just yesterday?) the toys often got tossed to the side and the fun would take place within the deep recesses of the boxes. We talked about how we would miss those days from now on, that she would enjoy getting clothes for birthdays and Christmas, she was growing up, a baby no more.
We drove up to their house and there were half a dozen teens on the front lawn chasing and kicking a ball and a good time was being had by all.  Arianna ran over to us, gave us our hugs and kisses then ran back to rejoin the play that was ongoing on the front lawn.  Michael (our younger son and father to the Princess) took the large box from the truck and I swear the box was smiling. It was happy to be a part of the frolic, I tell you.  As we went inside, the smile slipped a bit from box's flat face.  There in the middle of the floor were two babies, a boy and a girl.  One was maybe a year old. the other one was two.  They had their toys scattered around them and spared not a glance at boxy. He sat in the corner of the room awaiting his opening so he could spill his contents out onto the floor for Arianna's perusal.  After all the food was devoured, happy birthdays sung, candles blown out and cake and ice cream served came present time.  Boxy sat swollen with pride that he was the biggest box there and couldn't wait for the ripping and tearing to begin.  And so it did.  Arianna grabbed her loot and took it to her room to lay on her bed till she could give it the proper attention, but the four girls ohhed and ahhed over how great it was going to look.  The boys there could have cared less and were busy sitting on the floor kicking a balloon around, yelling "don't let it touch the floor".  The girls came back to the front room and joined in.  Even the adults got involved in the play.  Someone had taken all the paper and plastic from within Boxy and he sat waiting for someone to pay him attention. The babies could have cared less.  They were more interested in naps than play.  Then Arianna's eyes found him...boxy grinned as she quickly crawled over and like a flash was inside and laughing.  The other kids noticed the fun and the game was on.  As soon as one long legged teen vacated boxy's depths, another took its place.  Boxy, once crisp and bright and new, was losing it's shape and shiny glow.  Wrinkles now appeared on its once flawless face and little rips appeared where the box once closed itself off at the bottom.  Arianna now had boxy back and wore him like a coat.  From across the room we heard her father say "who do you think you are, SpongeAriannaSquarepants?"  The room erupted in laughter as she replied "that's who I want to be for Halloween" and he replied with "careful what you wish for, when we lived in England your grandmother dressed me in a box for Halloween!"  Laughing, I said, "yes, but you won for best costume...a calculator".
The party went on for a while longer, till boxy lay flat on the floor, worn out from all the fun that had been had at its expense.  As I looked over at the flat little pile of fun, I was so glad that Arianna was not as grown up as she would have us believe. Maybe we had another year or two before she would be too cool to get down on the floor and play with a box. 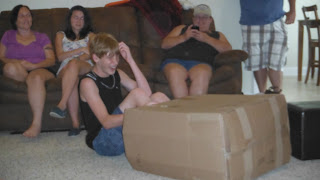 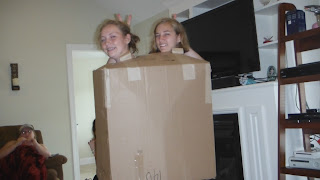 Posted by Sandi McBride at 9:03 AM

Such a sweet moment in time! I know just how you feel, they grow up so fast. But, thankfully, as you said she is her age not going on 20 or 30.

It's so strange that just a few minutes ago, I was sitting outside and remembering the first time my dad saw me with makeup (and I was a junior in HS) he made me wash my face! :)

So glad Arianna had a wonderful birthday and you & Mack there to share it with her.

Hard to watch them grow up, isn't it? My sweet girl will be 13 this year. On the cusp of wordliness, yet still our little girl. This one is still so sweet and innocent.

Oh they grow up so fast, our eldest grandson is 14 today.

I really enjoyed this post. So many good memories of my boys and boxes. Such simple fun. Thanks for reminding me again.

It's nice to see a girl enjoying her real age. My grand daughter turned 12 yesterday. She still likes her dolls and is a tomboy. I know it won't be long before she gets caught up in the business of being a young lady.

Pardon me, I'm having a moment...14? How is this even possible? You've got to document birthdays more often!

Your granddaughter and my daughter are the same age! It's fun to watch them do their thing and have their fun. Thanks for this post.

oh boxes are def the toy that keeps on giving...ha....we have lots of fun withour boxes...and even have a few of the larger ones in the storage closet folded up ready to pull out and relive some of the fun...they even have drawings on them that span 5-6 years of our boys lives...very cool...

a memorable sweet story mine will be 13 this year and was always too grown up. Her parent don't allow any silly sadly and this from a boy whose mother encouraged playing in mud puddles.

It is a bitter/sweet experience when the grandkids grow up! You are lucky she came over to kiss you in front of her friends.
Hope Arianna had a lovely Birthday.
My youngest grandchild is 8and a half (the half being very important!) and the oldest 17! There are 4 others in the middle (2 of them newly acquired step children!)
Nothing like grandchildren though, no matter what their age!
Maggie x

What a sweet account of Boxy and the fun he brought to your granddaughter and her friends. And somehow, he channeled your emotions.. funny how that happens. ;)

I enjoy your posts so much. I remember how much fun we had as children playing in boxes. I guess my daughter did too but for some reason I remember doing it at my grandmother's as apposed to remembering my daughter at that stage.

That's good that your granddaughter is enjoying being the age she is without pushing to grow up too fast. Those young faces don't need makeup but I remember being eager to wear it. The big challenge I had with my daughter was delaying her getting her ear's pierced. All of her friends had theirs' pierced and I finally modified my "not til your 18" to letting her do it around 15.

Here I am, right in the middle of remembering all our grands when they were little......*heavy sigh
So glad you were able to join in her fun party...so glad everyone had such a good time.
You should write a book, dear friend....you have a magical way with words. :)
xo bj