Laying the Garden By


It is, unbelievably, August.  Where did our summer go ,I keep
asking myself.  It has been uncharacteristically cool and wet,

everything we planted has made well. I have made enough jellies and jams to
keep us in sweets for the next three years. 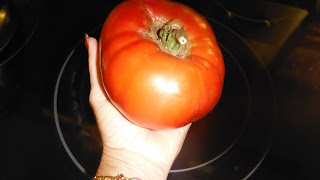 The tomatoes in the raised beds have furnished us with over 70 quarts of canned tomatoes, and I am in fact about to can twelve more quarts.  I find myself astounded that as often as I have offered free tomatoes to my face book friends, enough for them to can their own, I have had no takers.  Earlier in the summer I offered free Iris rhizomes and water plants for ornamental ponds.  I had one taker (thank you Carol for taking them off my hands).  In fact,I still have water plants looking for another tub or pond to call home.  But I refuse to go on Face Book and offer a darned thing again.  You read it here, if you want to start a water tub or ornamental pond and need plants, look my phone number up in the book and give me a call.  If not, well I have a number of tubs I can "borrow" from Mac to divide them out. 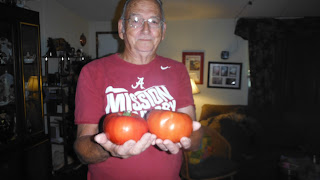 But, as I was saying before I went off on a tangent, it is August
and time to start planting the Cole crops, the cabbage, collards,
broccoli, Brussels sprouts and cauliflower.  I am getting anxious
now to pull up the tomatoes and retill the beds adding nutrients to
the soil to make them grow healthy enough for canning.  I have found
that I love canning and love my pressure canner.  I often cuss it
when the lid doesn't want to go on lickety split, but eventually I
sweet talk it on so the pressure can build and the time begin
counting down.  Last week I made vegetable soup. I called my aunt,
Margaret Kneece, and asked her if Mammy and Mama put the cabbage in
the soup to can or added it when they opened the soup to eat.  She
assured me that the cabbage went in with all the other veggies.  So
the soup has butter beans, okra, tomatoes (of course) carrots,
cabbage and potatoes.  I made my father pint jars that he can fix
as single servings.  I intend to make more next week.

I made a new friend in the canning aisle at WalMart.  She thought I
had called her name (Cathy) and turned to speak.  Well, I can
hardly not speak when someone looks at me expectantly so we had a
long conversation about fig canning (I start that tomorrow) and
before I knew it we were exchanging phone numbers.  She makes
Mozzarella cheese, from goats milk.  I intend to get a bit from her 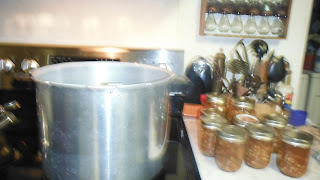 for my Eggplant Parm.  I used to think we grew it all.  Never
thought about growing cheese!  Now what better place to make a new
friend but in the canning aisle at WalMart when you are laying the
garden by?  I'll bet I can talk HER into taking some water plants!
Well, the jars are hot and ready to fill with luscious seed free
tomatoes, so I'll get to it...Little Susie Homemaker cans again!  Tomorrow? Fig preserves!
Posted by Sandi McBride at 5:32 PM

This Is My Blog - fishing guy said...

we have had so much rain our flowers and yard crops are weak and spindly...
ah well, next year praps

I have never canned, though my mom and grandma did when I was growing up. If I ever have a yard big enough again to grow more veggies, I might just be canning!

Look at all that goodness! Those tomatoes are bigger than Mac for crying out loud! It does not surprise me that you met a new friend and have exchanged telephone numbers and everything...very cool. Now don't forget to call her!

wow look at the size of those maters....i am just imagining the sandwiches i would make...smiles....my mom used to can with us kids...ha...cool deal...def not sure on growing my own cheese...smiles.

If I lived near you I'd be standing in line for any extra tomatoes! You are a busy woman!

Oh every sounds and looks so good. It's so nice to hear you talking about canning; I've never done it my mom sure did.

Figs? My word, that was one thing she made that we ALL loved! Homemade biscuits, butter and figs. Nothing better!

nothing is nearer to God in my opinion than a garden fro many reasons ..the birth in soil, the toil, the love,hope, faith on and on ....

Can't believe there weren't any takers! If I were closer to you, I'd be in line with Pondside!Hahaa
I don't think we Have a canning isle in our walmart...the younger ones tend to want instant Everything here!
hughugs

Our neighbors down here in NC left for the summer and bequeathed their tomatoes to us. What a treat! You are so generous. Your tomatoes must be really delicious. I admire all your work.

Sandi, I'm so glad your garden and kitchen efforts are so prolific! If it didn't cost a fortune to ship things I'd gladly ask for some of your canned goods and tomatoes. :-) Since I know you plan on planting the same or similar next year, I'm wondering if there's a way you can sell or donate some of that produce to help the impoverished.

i bought a canner for my green beans. guess what??? lots of beautiful vines but no beans. i think God was just helping me out. if i had had beans on top of cukes, tomatoes and figs, i would have gone crazy.

If I lived nearer I'd come and raid your pantry and your garden. ;)