Dudley Cock of the Walk 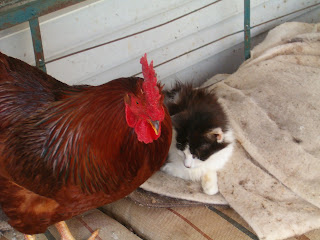 People who follow my blog all know about my cock eyed Rooster, Dudley. He came to live with us when his former owners' dogs tried to eat him sans dumplings. He showed up in the yard, tail feathers ripped out, one wing injured and just in a very sad way. Except for his voice, that is. His voice was as strong and vibrant as ever it had been. Mac very generously went to the feed store and bought cracked corn for bedraggled rooster, but he preferred to eat cat food with the cats. Yes, you read that correctly. Dudley (as in Dudley Doright) has a fan club of cats and and kittens. We haven't decided if he thinks he's a cat or they think they are roosters, but they get along together very well. The kittens will even cuddle up to him to sleep when Dudley calls his day done.


Dudley's tail feathers have grown in so thick and luscious in irridescent colors of green and purple that I feel sure he has a guardian angel in the late Mr Will Eddins. Mr Will raised some of the most beautiful roosters ever seen. And not for any reason other than the sure joy of their beauty. Our old boy never leaves the place, he's cock of the walk and sings all day long. He greets the sun before the sun even thinks about coming up, he hits the hay before Mr Sun says good night. I put out cat food twice a day and Dudley always races me to the food bowl, he and his favorite kitten, SuzieQ. Yes, he has a favorite kitten. The little black ball of fluff often gets her catnap next to Dudley out in the garden where he has scoouched out a warm nest of dirt. The cats are all very protective of their big odd brother. I've seen them gather around him, circling the wagons as it were, if they felt he might be in danger. I've never seen anything like it before, nor do I expect to see anything like it again. Sometimes I think God scatters little jokes amongst our lives to lighten us up. After all, I can't take anything to seriously as long as Dudley has his flock of cats.
Posted by Sandi McBride at 10:46 AM

Isn't is great when animals that normally hate each other end up as being good friends? Our dog, Sammy, and our tomcat, Fluffnuts, are like that. I give all the credit for that to Sammy though as this mutt has never met another animal that he didn't think was his long lost friend! I keep telling him he better watch his p's & q's cause one of these days, he just might encounter a very unfriendly cat or worse, a dog that wants to and could, rip him limb from limb but he pays no attention whatsoever to what I tell him and just keeps making new friends. Great role model for the human race, don't 'cha think when animals like Sammy and Dudley have friends all over the place -and very unlikely ones at that!

that is cool that he and the cat are friends...wheres the picture! let us see dudley...smiles.

Thanks for the title...I'll take it!
Blessings to you and Dudley ;-)

Oh Sandi...this is such a sweet story! Makes me want chickens again!
hughugs

Dudley and His Herd of Cats...what a title! And I like what you said about God's scattering little jokes in our lives so everything won't seem so serious. I know this...this story makes me smile.

" Sometimes I think God scatters little jokes amongst our lives to lighten us up"
If I get one thing from the day I'll be happy if this line is it.
Great post!

That would make a great children's book San :)

That is such a wonderful story! Thank you for the smiles:-)

Enjoyed reading about Dudley and he does seem a most unusual cockerel..... not that I am an expert on them!
Maggie X

That's fantastic! Wish I could see a picture of the cats and Dudley together. I'm so glad you found time to post today. This was well worth the read!

Awwwww, how special is that? I'm glad for Dudley. It sounds like he's made some great, albeit odd, friends at your house. What a great story. :-)

Creatures are so amazing. My sister once had a trio of chickens and numerous cats. One of each found each other much as your Dudley did with the cats. They walked all over the yard together. The cat even began walking much like a chicken.. with head bobbing.. sort of. They were quite the team. Great story, Sandi. :)

how sweet! so who says creatures of all kinds can't live together?!?!

Dudley and his posse. I love it!

ha. great pic...thanks for putting it up

i've always said that God has a delicious sense of humor. I think moments like this are his way of giving us a small glimpse of what heaven will truly be like. As usual, great story!

How sweet of the cats to take care of the rooster! One of our cats thinks she is 1/2 human, 1/2 dog - she loves the dogs, but hates our other cat.

Nice to see you here, Sandi! I notice on FB that you play some of those games! Haven't tried any yet, but everyone seems to like them

Hope you and Mac are doing well. :)

Breaking my self-imposed rule about checking in on someone. I am hoping that you'll squeak and let us know if you and yours are all okay. I'm emailing, too. Maybe calling, three.

I've always thought God had a sense of human. After all he put me together!

Since I am an animal lover anyway, I've observed lots of interesting relationships.

I think people should follow the likes of the animals...don't you? Our rooster was sent packing back to the big farm (where he lives the life of Riley) He decided he was the boss and not me. And things weren't working out. I loved him though...he was one gorgeous rooster. :)