Daddy and the Lady Banks Rose

We moved back to Chesterfield County in 1989 after Mac retired from the Navy. I had told him that since I had followed him all over the world for so many years, it was time for him to follow me, and that I was going to Chesterfield. Like any sensible man, he followed. My parents were happy that we were settling nearby and that they would get to be closer to their grandsons.


Mama, who was a master gardener in all but degree, was eager to share her plant knowledge with Mac and me. She took us all over their massive yard pointing out the beds of roses, the scattering of daffodils in the woods and in particular the Lady Banks Rose that was growing up the side of the garage. She had planted it as a stripling about 12 inches high and had pampered it and babied it for six years. Now in January, she was anxious to show us how she had placed brackets on the garage to secure it to so that it was 15 or so feet up and then swagging down. She told us the blooms this year would be spectacular and it would occur around Easter. I shared in her excitement and everytime I went to visit was greeted by the site of the bare limbed Lady Banks. I would go over and examine it for signs of first leaf.

Okay, now Daddy had a pair of loppers that he used to trim the trees to keep their branches from assaulting him when he was riding the mower or driving the car down the drive. He loved those loppers. They weren't much to look at as loppers go, but they were kept lovingly oiled and ready for action on a hook on the wall inside the garage.

Weekends starting in early spring were dedicated to neatening up flower beds, opening garden plots out back for the veggies that Mama grew with pride and aplomb and general yard work and weeding was carried out. Our younger son Michael enjoyed spending weekends at his "sweet little Grandma's". He didn't mind helping out there, though I couldn't get him to turn his hand in the yard at home. I would go to pick him up and take the chance to admire the Lady Banks and ooh and ahh over the new leaves it was putting on. It really was going to be glorious this year, I could tell. So one warm Saturday morning, I took Michael to spend the day at Grandma's. Daddy was out and about, no suit and tie but dressed in his yard work gear, a well worn pair of khaki shorts an old plaid shirt and faded green hat on his head. Oh, and loppers in hand. He had trimmed the magnolia tree limbs and was clearing the circle of dead branches and weeds that Mama and the kids had pulled. He waved at me as I dropped Michael off. I glanced at the beauty of the Lady Banks and dreamed of having one like it one day.

So it's about 4:30 that afternoon when the phone rings. On the other end, Michael is breathless with something akin to fear. "Mom, you've got to come here quick, Grandma is going to kill Grandpa!"

Okay, now having heard Mama threaten to kill Daddy at least 100 times a year for most of my life, I'm not getting so excited over this piece of news. Stifling a yawn, I ask him casually "so, what did Grandpa do this time?" A tremble

was in voice, he couldn't hide it. "He lopped off Grandma's Lady Banks." I sat straight up, rigid with anger of my own.

"So you're gonna stop her?" he wanted to know.

"Oh no, I'm going to help her!" I told him, a deadly calm in my voice. I heard him yelling "run Grandpa run!"

Okay, so we didn't kill him. But Mama took his loppers away. He was not allowed to use them without strict supervision and only when Mama saw the need of them. Funny, but she didn't feel the need of their use for many years after that...
oh and ps:
yes, I do have a Lady Banks Rose, she is 10 feet high and no one but no goes near her with anything sharper than a camera lens. 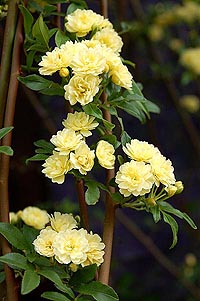 Posted by Sandi McBride at 6:57 AM

hee heee heeee, i too know of a man, who once offered to prune his neighbours beautiful shade tree, after which remained but a trunk and a few branches....

I loved that story. I was sure glad that your son didn't cut that Lady Banks off.

lol! Oh that was great!!

That rose is beautiful... yellow roses are my favorites.... Happy Easter!

OMG.....Hahahaaa....I HAD TWO of them!!! HUBBY did the Same Damn Thing! I went to town and when I drive up...they are gone! Needless to say life was HARD for him for weeks!!! What IS IT with men and clippers???
...I'm STILL MAD!!Hahaaaa
Thanks for the story!
hughugs

Ohmygosh! I almost fell out of my chair laughing! That is so funny! I'm sure glad that your Dad was allowed to live an that your Mom kept the loppers away from him. Probably should have done it before she learned he ran with scissors. LOL

That one's a doozy!

LOL I loved that story Sandi!

MWM is not allowed to cut anything down in our garden without my express permission. ;)

Oh and what a corker it is, too. Yellow roses...nothing lovelier. What in the world was your father thinking? I can not even imagine what would have possessed him to do such a thing. I'm truly surprised that he lived to tell about it. Ha!

I'm always so glad to see you here, Sandi, and read your stories! This was a good one. :)

Hope you're doing well, and wish you and yours a blessed Easter.

hahaaaa...surprising that he lived. :)))
And, thanks for coming by and telling me how GREAT I looked with that flowing, blond hair. :))

see this would have been me...trying to do good and jack it all up...thats why i try to stay in running form...smiles...

What a great story. I love it! Beautiful shot of the roses too.

Love this. It happens around here about a dozen or so things. My husband only mows, but he is not a flower or shrub aficionado, so EVERTHING is mowed.

I noticed your comment with you cute dog Digby. I have that feeling about every dog I have ever owned, including my present rescue Luckie. My others were pure bred German Shepherds.matte

When we were preparing to move here, I carefully culled out some of my favorite flowers and shrubs to transplant. I had a very young black walnut tree that I had just planted, so I planted in a pot and brought it along. It stayed happy in the big pot until that fall. We walked around the property and carefully selected a spot for my tree. After we had given the tree a proper planting, I suggested flagging it. It was only about 2 feet tall. But ..... he who knows everything said he would remember to mow around it. He swears he didn't mow it down, but I know that he simply forgot and it is gone. I know just how she felt!

Stopping by to wish you a HAPPY EASTER !! HUGS JO

I'm both laughing and cringing together here - I don't know who I feel the sorriest for, your poor mother (after all that precious tending) or your hapless father (I doubt he ever lived it down)! I do so love the way you relate a tale.

She is really beautiful and I don't blame you for confiscating the choppers. Keep them under lock and key!
Happy Easter.
Maggie X
Word verification is MORTIS

I LOVE thia post, and can totally relate to it all. Gom was almost killed for very similar actions. Luckily, he had live to tell the tales, but many of the plants have not been so fortunate!

That is a lovely rose. It would have been a tragedy if that had been cut down. The garden is the outside room and requires a woman's touch just as much as any room in the house.

there's a lopper in my family too...(family meaning me and him). He, just the other day, "accidentally" cut off two of my peonies that have a little white wire fence around them. He "claims" he didn't see it! Ha! I have even tied bright ribbons on limbs of small dogwoods etc. on the edge of the woods that I want to grow up big. Otherwise they would all be "lopped" off. :) Sandi, I would love to know more about your guineas. We want some. How do you find their eggs? Don't they just have nest all over the place? Hope you had a glorious Easter my friend. xo

LOLOLOL Oh, man. What a story! How funny, although I'm sure it wasn't at the time.

Your Lady Banks rose is just beautiful, Sandi. Your mom did a wonderful job of sharing her growing tips with you. :-)

Would you share a larger picture of your Lady Banks with us, please? Best would be scratch and sniff, though. ;-)

What a great story! That sounds like something my dad would do to mom. Dad would tell her it was for the good of the plant and have us believing it, though! What fun. Thanks for sharing the memory.

Hi Sandi - Ah, family stories like this - so funny afterwards, so damn awkward at the time!

I sympathise with your dad - because I too love my loppers! And I can entirely see your mum's side as well - she must have been incandescent with rage I imagine.