I came out of my turkey coma and discovered it is already December 1st. Before we know it, 2009 will have come and gone. Just as I began to remember the correct year to jot down on checks and other things, soon I'll have to start over again but with a different year. It seems unfair somehow, that the days get shorter just as the year comes to an inglorious end.

Thanksgiving was such a success and the leftovers were at a minimum. A pinch of turkey and a smidgen of ham. But there were pies to put in sharing tins to go home with the kids. Poor Mac was only able to keep half of one of the pecan pies and only because he hid it. I tried to tell him I could make another.

No one went to the movies, except in my own living room, where we watched Star Trek 2009 (I loved it) and UP (I adored it!) . So if I take off for Disney World, I suspect I'll have to take the whole family along. It was a wonderful day and one that I will remember for years to come. It was the first time the entire family was together for Thanksgiving in ten years. It meant the world to me.
Hope your Thanksgiving was as wonderful as mine! Yes, this is this years tree. 8 feet of decorating hell went on, and I've still to tackle the rest of the house. Or the yard. I may leave it all up through January. 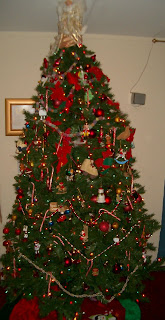 Posted by Sandi McBride at 4:56 PM

Happy December! I can't believe it's here!! What happened to November!!

I know what you mean about having the whole family together. My son and his then girlfriend had come for Thanksgiving right after they met, must have been 1989 or 90. Then when we lived in PA in '93-'95, we were with them at her Mother's house on Thanksgiving at least once with Daughter coming up from college. Since the grandkids, though, this was a first Thanksgiving for all of us.
I sent a Pumpkin pie home with them to eat on the way since they had to spend one night in a motel.
I saw both of those movies at the theater and I liked them both. Start Trek was great.
Mama Bear

I suspect that December will pass so fast that we'll hardly realize it till it's over.

I love the header Sandi! So glad your holiday was wonderful. We enjoyed ours much too. Time with the kids is always wonderful. We saw ST in the theatre and loved it! This new cast is great.

Love your header! Take me with you to DW! I saw Blind Side and loved it!

Happy Dec 1st! I have the movie UP in my Netflix and am waiting to receive it...
Hugs,
Penny

Your tree is beautiful. I am glad you had a nice Thanksgiving. That is wonderful. You deserve to be surrounded by loving people.

Did you just love that Star Trek movie or what....... Me and my sweet DH rented 8 movies the day after Thanksgiving and sat and watched movies and kicked back! So glad that you TG was fun........

Sounds like a huge blessing.
I recently watched Star Trek 2009 .. I thoroughly enjoyed it. But then,I watched Star Trek when it was on first-time TV and saw all those movies too. I didn't watch next gen weeklies but have seen many of those movies. -- Probably best to have hidden the pie - it's so hard to make more after the holidays. :) Jenn

Glad your Thanksgiving was wonderful.. so was mine... best ever... just hated that everyone had to go somewhere else for the evening meal... our's was at 11 am and I didn't have to cook a thing.. my children and granddaughter's did it all...

How wonderful - all the family together; it doesn't get any better!! :)

Lovely written Sandi
its a touching story !!
Its always a wonderful feeling when the whole family is together.

(We also celebrate chrismas in The Netherlands, St. Nicolaus is only for children but I stay always a little girl .... LOL)

Have a wonderful day and thanks for your sweet comment :-)
Anya

Seems like all your hard work got its just reward!

is that your tree up this year??It's gorgeous and big . I want to get mine so badly this weekend..

So glad, after 10 years, you had your entire family together and it sounds like it was a fabulous event!

It sounds perfect. Your joy is contagious. :)

sounds like you had a fabulous thanksgiving! how cool to have everyone together as well...have a marvelous day!

That's great that you had your whole family home. That makes a big difference.

I know what you mean about remembering the right date on checks. Why do we have to do that☺ I think we should have at least 24 month years. Does that we mean we get to live longer☺

I am so glad your Thanksgiving was great. Mine was pretty tame. I tried to make this a nice one for my mother but my brothers didn't cooperate. Oh well.

So happy that you were able to have the whole family together! I am going to try that next year. I will try to guiltt the kids into coming, but know that I will no doubt go to them. Either way is okay with me. I am longing to see them all today.

Sandi, ours was great too. Isn't it magical when a holiday works so well?

Everyone under the same roof, getting along, helping out, the food turning out, being consumed, and just enough leftovers?

Have you got your Christmas tree up already??

Have a very happy December. The Holiday Season is my favourite time of the year.;)
xo
Zuzana

Family get-to-gether's - you can't beat them especially when there are no pinch up's! Hope you have a great festive season too.

Glad to hear you had a great Thanksgiving. Time to get ready for Christmas now Sandi! :)

That is some tree that you have there! Pleased to learn that Thanksgiving went to plan.

The leftovers sound smashing. I'd hide the pecan pie, too.

Ah, Sandi, it sounds like you had a perfect Thanksgiving with everyone at your table. Those pies, now, I certainly would like to have had a piece of pecan!

Hahaha! Ain't that the truth! LOL! I'm glad to hear you had a great Thanksgiving. Isn't it wonderful having all the family home?

Funny about Mac hiding the pie - and the tree looks great!

This Is My Blog - fishing guy said...

Sandi: Thankfulness never ends, we should be thankful for life each and every day.

Your tree looks amazing!! I love it. So glad you got everyone together for Thanksgiving. When all my kids were here last year for Christmas it was a magical time and, considering what came afterwards, a moment in time we'll treasure always.
I made my first pecan pie this year - ever! I had never even eaten pecan pie until Randey and I went to that Sky Ball back in October. They served that as dessert and I was hooked! I made mine with Splenda and Light Karo syrup (didn't even know they made such a thing until recently!). Randey loved it (although, knowing Randey, he may have just been being polite. lol) Jake's little girlfriend loved it, too, though so maybe it really did turn out okay. :)
I'm working on a post about Jacob that is going to make your heart swell with pride!! He has shown himself to be a true patriot and a fine American. :) I hope to have the post up soon. Let me know what you think of it, okay?
Oops - gotta go. Randey's headed for another TDY and I want to spend some time with him before he goes.
Love you guys!

But just think, after December 21st the days start getting longer again. :) yeah!