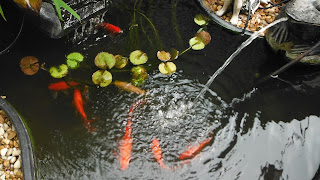 I was introduced to the love of Koi by my mother.  She had a large ornamental pond on the left hand side of their patio that was built by my sister Nikki and brother Michael.  They actually ordered the first koi from a pond and pet magazine. The first three became a dozen before too long.  I admired and loved the koi pond and longed for one of my own.   For our 30th anniversary Mama ordered us the full set up, pond liner,pump and water conditioner. I was so excited to get started on it but Mac said that being October was full on us, we would wait till the weather was more conducive to  fish ponds and fish.  So we waited out the winter. When early April came, I began to campaign for the pond construction to begin (read nag for campaign).  He continually put me off for one reason or another.  I just could not get him to show any interest in the koi pond at all.
It was mid May and I decided to take matters into my own hands.  Going into the garage, I dragged out the cumbersome box of pond doings and walked about the front yard of our house on Jackson Road in Chesterfield.  I found the perfect spot with a bit of shade from the pecan tree, dragged the hose over and formed a bean shape about 14 feet long and 8 feet wide.  All the while, Mac was watching me, never offering  to help  or even to ask what my intentions were. I worked on, got a spray can of white paint and painted the outline of the pond I wanted onto the ground. I dragged out the rotor tiller and worked on getting it cranked.  Finally Mac walked over to ask what in the Lord's name I thought I might be doing.
"Why, I'm putting in my koi pond...it's going to be too late if we wait much longer."  He gave me that "move over and let me show you how this is going to go" look.  \
"This where you want it to go, you're sure?"  he asked.
Very innocently, I nodded yes, this is where we needed it to be.  He started the tiller and after about two hours, the hole that would accommodate the pond liner was done.  I helped him smooth in the liner, we filled it with water, added the conditioner and Bob's your Uncle, except for fish, we had a fish pond installed.  He never suspected he had been tricked, and I have never told him.  But I suspect he knew from what followed several years later.
When we bought the house here in Jefferson, we were not going to have time to do anything with our koi, whom I had learned to love. We ended up selling them (and contrary to opinion I did not run criminal histories on the applicants).  This was in September, and once again came the argument of weather conditions and fish ponds.  So in April of 2005, I got out the paint can, the hose and the tiller and Mac, taking one look at the paraphenalia, said "oh no, we're not going through this charade again.  We'll do the pond later, there's too much yard work to catch up on first."  By dark, the fish pond was in.
We had a bad storm last night and when I went out to feed the cats and the fish I saw the pond with only enough water left in it to keep the fish alive.  I ran as fast as I could down to the well, connected the hose, praying that my koi would support this insult to their habitat. The frog spitter had been shifted severely by the wind and the water had sprayed out onto the surrounding ground.  After filling up the pond and seeing the koi happily gathering for their breakfast, I watched them feed.  I saw something on the edge of the water and reached down to  pluck it from the water when suddenly I found myself IN the pond, my feet unable to get purchase on the slippery bottom.  I was yelling for Mac and got no response.  Finally dragging myself from the water, I shook myself like a dog and went into the house and confronted Mac. He burst out laughing, asking "What on earth happened to you?"
"Well", I responded, "I am certainly glad that a serial killer or a coyote didn't have me, I would be out of luck!  I fell into the pond!"  He was still laughing when I stomped off to go find dry clothes.   I'm not sure what my revenge will be,but I hear it is best served cold.
Posted by Sandi McBride at 3:13 PM

Cold cuts for supper? Yippee! I don't know how you do it all...cats, dogs, fish. Do you have a chair down there to sit of an afternoon watching? I suppose that you must do that alone.

I enjoyed reading that post!
Mac sounds very laid back and you sound more like I am..... wanting to get on with the job!
Anyway, glad you managed to get out of the pond Ok and to live to see another day!
Maggie x

Very glad you were able to get out of the pond by yourself...

Now that would have been a video moment for sure.

Oh mercy, only you! Or, at least I bet that was what Mac was saying. I'm sorry, dear lady, but I'da been laughing too. However, I'm glad you weren't hurt.

Mac is one in a million and I know that you cherish him even though you could at times throttle him!:-)