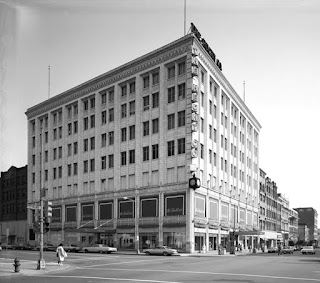 When I was in my early teens, we had two distinct Presidential Holidays...there was Washington's  (February 22) and Lincoln's Birthday (February 12th).  The Government had not rallied around the White House to make Presidents Day all inclusive then, and the biggest day for Mama was not Valentines Day.  It was Washington's Birthday. (We happened to live in our Founding Father's city, Washington, DC.)  And the sales.  The Post would list the sales for the shops that mostly are no longer doing business in DC (or anywhere for that matter)...Lansburghs's, Garfinckels, Hechts (Hechts was on 7th and F St...oh how we loved Hechts!  And oh yes, there was Woodward and Lothrop...or Woodies to Mama.  We would camp out early on 7th Street to begin the day of bargain hunting.  She once got a sewing machine for ten dollars by being the first customer in line.  Back then people didn't try to knock you down getting through the door.  They acted more civilized for the most part.   We always hit Hechts first, then moved on to Lansburghs and Garfinkels...that is where Mama's mink stole came from and  I think she paid twenty five dollars for it.  After a few hours of shopping we would stop at the Hot Shoppe for burgers and fries and a fountain soda.  Our feet would be tired but our spirits would be high.

We would manage to get home (we lived on Reservoir Road NW then) with all the packages in tact somehow.  Mama would go through her wonderful finds occasionally saying "why in the world did I buy this?"  One of us would say "it was on sale" and that question answered, she would continue her perusal.  Now when the sales go on for Presidents Day the tv ads are mostly disgusting.  They have impersonators dancing like lunatics to the most awful music they can dig up.  There is no dignified recreation of the photos of our dearly departed Mr Washington and Mr Lincoln.  I have no desire to go bargain hunting.  For one thing, you are apt to have to go looking for first aid due to the horrible manners of the rest of the bargain hunters.  But it is really the tv ads that are most offensive.  I'm sure that not only are the Presidents supposed to be represented frowning down from Heaven, that third face you see giving the famous Douglas glare is Mama.  She is not at all pleased.
Posted by Sandi McBride at 5:00 AM

Such a sweet story, Sandi, and a nice memory!

Commercialism has taken over, you're absolutely right. It's enough to make a person not even want to hit the stores, and I don't except when necessary. On top of that, the commercials on television regarding the sexes? My mom would have been appalled just as I am! Remember back when they wouldn't television a woman drinking alcohol or smoking. Now, nothing is held back at all. :(

Have a wonderful day!
xoxo

What a great memory of former days and your mother's bargain shopping. A sewing machine for $10?! Amazing.

You and John could make a great team kvetching about the DISGUSTING Presidents Day ads. When those nimwits representing Lincoln and Washington start singing about "blue tooth," John just about loses it. I have to hold him down. Ha!

Sweet memories about the past. Shopping was a big deal when we were kids. We put on our best clothes and shopped downtown. We would go to the Baptist Tea room for lunch.

Thanks for sharing your memory with us.

I always love to read about memories of days gone by. It makes me feel nostalgic for an experience I've never even had (being Canadian, that is).

Wonderful memories Sandi! I remember those days too and how much fun it was having 2 holidays. And yes, folk were more mannered to each other then. They didn't rush on the elevator before you had a chance to get off either. I bet you raised your boys with respect for those 2 wonderful President's and those holidays.

I love a good sale! Like you, I don't like to shop with mobs of crazed bargain seekers. Nicer to stay home and peruse memories.

Presidents Day is a hideous concept. Instead of glorifying the truly great, like Lincoln and Washington, we lump them together with the Hardings and Tafts and Clintons of our past. Whoopee!

As you know, I lived quite close to Reservoir Road, NW.
One of my first purchases as a bride were a glass salad bowl at Woodies on 7th St and a Cuisinart at their Chevy Chase location. I had read about this versatile kitchen appliance in Julia Childs' "Mastering the Art of French Cooking". I happened to be at Woodies when all of a sudden an announcement came over the loudspeaker, the Cuisinart would be on sale for the next two hours. I remember happily paying $ 169. The machine works to this day! ;-)

When Woodies closed, and then Garfinckel's, those were sad events. I bought Breuer chair at their final sale, for the sake of memory. I cherish a few Christmas tree ornaments I bought there.

Thank you for the memories and wishing you a quiet, enjoyable weekend,
Merisi

These are definitely some great memories to cherish. That shopping trip sounds like it was so much fun!

I think respect in a lot of areas in this world have gone right out the window. Things were so much simpler and moral back in the 50's. I miss that.

that seems to be the base of modern advertising...its fairly disgusting most days....but they do it for a reason...and one that we as the public give them...sadly...