they never listen to their elders... 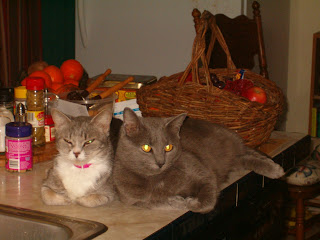 It was a few Tuesday's past and Sonny, the little Russian Blue kitten had an appointment for Wednesday morning with Dr. Taylor , our beloved Vet. He was going to have a little, well shall we say procedure? We hadn't yet broached the subject with him, I just planned to pick his little highness up and place him in the pet taxi without much ado. Placing the Pet Taxi to the side of the bookshelf, I left it open so that the cats could explore it's innards and figure out that there was nothing inside to hurt them. Pyewackit and Hound being the most recent passengers avoided that open door like the plague. They tried to warn Sonny and Cher, but they're kittens and they don't listen to their elders any more than any other teenager. They romped around inside it, chasing each other in and out of it and all the while the two adults just sat back and watched. They were cringing. I remembered when I had taken Pyewackit for the same procedure sixteen years ago. He talked to me all the way to Hartsville, we sang and laughed and he was Mama's boy and all was fine in his world.

On the trip home the next day, Pye presented me with his back. He did not speak. He did not sing. He was no longer Mama's boy...he was just angry. As I drove I talked to him, promised him shrimp when we got home, promised him it was going to be alright. He turned and hissed at me. He didn't speak to me for two weeks.

Hound, being a little lady, had a different procedure, but a procedure she did have. When we took her in, she was a sweet little baby who, having been raised by us before her eyes were even open, thought we were the biggest cats she had ever seen. She would curl up on my shoulder to sleep and purr like a proper princess. After her little op she changed gradually. She got bigger, not fat, just tall. She became very bossy and demanding. A few weeks ago Sonny got out by accident and spent all night under the porch. The next morning he showed up at the patio doors asking to be allowed back in. I opened the door and he ran to Hound who proceeded to beat him to within an inch of his life. She had not given him permission to stay out all night, and was asserting her authority over him.  She treats us much the same.

So the next Thursday we went to pick up Sonny  and bring him home. He was so glad to see us, he purred and chattered all the way home. I was reading the post-op instructions about using paper litter etc. etc. I looked over at Mac and told him that I had just thought of something. "What?" he asked. "I hope Hound doesn't jump on him for having another overnighter." He laughed and said that when Hound saw him come out of the pet taxi, she would take pity on him. He was right.

When we got home, his sister Cher was all over him, asking where he had been and that she had been worried about him. She was giving him a good bath and Sonny was enjoying the attention. They were so glad to see each other. Cher pointed to Sonny and asked "what happened there?"  Hound rolled her eyes when Sonny, in mid bath stopped and stared at himself..."dunno, they were there when I left home." Since neither of them particularly cared that a change had indeed been accomplished, I felt good about Cher's little trip in two weeks time. I haven't told her about her appointment yet. It seems to work better when you keep it a secret.
Posted by Sandi McBride at 7:53 AM

Our beautiful furball -Pearl, the Purrball -had that done almost a year ago now and boy, how she has grown since then! Pretty soon, we should have the same thing done for Octavia aka Tavie before FlufferNutter (aka FluffNuts) gets any wise ideas about creating more little Pearls and Tavies here! Hope when the time comes that Tavie responds the same way that Pearl did -with love and gratitude. Well love, anyway -gratitude only occasionally.

I had to chuckle about the pet taxi and the trip to the vet. My cats did the same thing when they got fixed. Of course the cats can smell the vets office on the cat that had surgery. Cats are so sensitive.

Oh you tell a funny tale. =D I'll be sure to follow your advice and not tell Molly about her appointment in the morning, though that little op was done years ago.

It is fun to watch them care for one another, isn't it. They all have their own personalities. Mr. Martha has managed to insert himself into the center of our pet world here. He loves to play with his canine siblings and they love him. Well, except for Oscar, the old guy. He merely tolerates him.

Too cute. I know that turned back, hiss mode following a vet visit of any kind very well.

Aww...I'm glad Sonny came home to love and care. LOL Love your take on the cat's attitudes! My vet uses a spray on a tissue that makes the cats calm. It's some sosrt of pheromone. I can't afford a can of it cause it costs a bunch but it sure works.

I really enjoyed reading this post but obviously it made me cringe a bit because of the very nature of it.
I just feel that all animals have such vastly different personalities and different ways of dealing with things. Just like humans really. Hope they get over the little procedures really quickly.
Maggie X

I always tell mine those bits are surplus to requirements!

Such a cute, sweet story, girl. You can tell them so well. :)