I was on the phone with my sister Toni the other day and we were talking about the times we spent at our Grandparents home every summer. I looked around as though someone might overhear me as I asked her if she remembered the egg fight. She laughed and said she remembered it well. This particular summer in 1960 we had taken the train from Washington, DC to the station in Hamlet, NC all on our own. It was an uneventful trip, but we grew more excited the closer we got to our destination. We couldn't wait to see Mammy and Daddy Dwight. We were also excited to see the cousins who were waiting on our arrival at the house. The first two or three weeks went well, tobacco season was well underway and we enjoyed being involved in the work. Every Saturday Daddy Dwight went to town to get things he needed for the farm. He always stopped at Hurst's Feed and Seed to pick up three to six dozen eggs. Just that week Mammy had read in the Readers Digest that the common practice of the time of buying what was called "cracked eggs" as an economy device was no longer considered safe. They recommended that people in the habit of this practice should stop immediately to avoid salmonella poisoning. Mammy had taught school for years and this made sense to her. She had worried about using the eggs that were already in the house and tried not to let Daddy Dwight know that she was disposing of as many as she could in the compost bucket.

One Saturday about midway through our visit she told Daddy Dwight that she needed him to pick up eggs. She explained to him about what the scientists were saying about the cracked eggs and asked him to get only good whole eggs. Something about the dependability of Scientists in general and the FDA in particular was muttered under his breath as he left the house. Mammy must have had a suspicion that her orders were going to be ignored, because on his return when he and the hired man brought in the eggs and placed the crates on the kitchen table, she immediately opened the box to take a look inside; Daddy Dwight had sat down in his chair at the table to read the newspaper. He never glanced one time at her to see what she was doing. What she was doing was examining each layer of eggs as she removed the trays from the box.
"Dwight, I thought I told you not to get cracked eggs. There's cracks in every one of these."
"Waste of money. There's nothing wrong with these eggs. Use them."

Now Mammy could get this look on her face that started in her eyes and moved down her face like a glow. A smile crossed her face and she picked up an egg in each hand. She looked down at the egg in her right hand. "Oh, I'll use them all right." I was never quite sure why I laughed. Was it the look of shock on Daddy Dwight's face as egg white and yolk mixed with shell dripped down his face or the sudden widening of his eyes as he realized that the second egg was headed in his direction? And as they say, that's when the fight started.
They threw eggs at each other saying not a word. No yelling no swearing (I don't believe I ever heard either one of them use a swear word as long as they lived.) They grabbed up cartons and moved through the screen porch still flinging eggs. The fight moved into the front yard the eggs still flying. I ran as fast as my legs could carry me to my Aunt Margaret's house to get help. It had ceased being funny when Daddy Dwight broke the egg on Mammy's head and ground it in with the heel of his hand. That just was not done! You know, I believe it may have been the quietest fight I've ever heard. The only sound was the whoosh of eggs as they flew through the air and landed splaatt on the intended target. Pretty soon Aunts Margaret and Pat were on the scene and got things under control. The fight was over, but the glaring continued for days. You know how when something perfectly awful happens that you say "we'll laugh about this one day"? They never did . Not ever. It was simply not talked about, the egg fight. It was as though it never happened. And Lord help any of us that brought it up.

So we just didn't discuss it. Until now and I've waited a safe 20 to 25 years since they left us to bring it up. . I just hope I've waited long enough. But you know what? I've never laughed as hard as I've laughed this week as I've discussed it with Toni and cousin Crystal...and wondered why Daddy Dwight and Mammy couldn't see the humor in it. At least no one died of Salmonella poisoning... 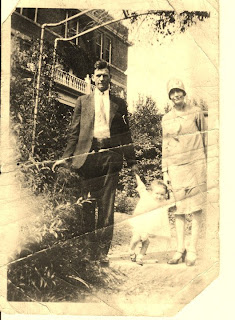 Mammy and Daddy Dwight with my toddler mother at Winthrop University which my Grandmother attended
Posted by Sandi McBride at 10:26 PM

Wow. That's wild. And there's the beginnings of a novel there, too!

Oh wow.. that's quite a story. I would have thought for sure that they were doing it with mischief in mind. Too bad they didn't find it as amusing as you and Toni did. Maybe they're laughing about it now. ;)

Oh Sandi! I love it when you write about some of the things you remember from your childhood or about other high (and low too) points in your life, about your ancestry and such! As I read this, I was remembering the natures of my own grandparents and that they both were very quiet-natured people that I couldn't fathom even taking the time/energy to disagree with each other. If there were things they got upset about, they were apparently extremely good about hiding those feelings. With one exception and that being as my Grandfather's eyesight began to fail -along with his mind -and he would make incorrect moves while playing Chinese Checkers, my Grandma would then yell at him telling him "You can't make a move like that, Man! That's cheating!" And he would look over the board trying to figure out what she was hollering about but never argued with her when caught.

Now, that is TOO funny!! You do have some mighty good memories, Sandi!

John and I have been laughing as I read it aloud to him so he could appreciate it, too. They just didn't have time to laugh about it in this world. Perhaps, it's been funny to them in the next. I hope so. It's a great story!

You made me laugh aloud...and then I was saddened that two good people could get into a fight so serious that it could not be referred to...

I know you said they never laughed about it, but how could you not? It sounds like a scene out of the Three Stooges via the Marx Brothers & Laurel and Hardy.

Great story and I laughed out loud at the image of the egg fight.

Ahem, no prizes then for guessing at who it was, who handed you on down that fiesty temperament..?

She was quite a sassy lady for her time, that grandmammy of yours (grin) - I'll bet he never brought her any more cracked eggs home, after that day! I do so love how you recount these snippets from your past, you have a wonderful way of setting them to words, and making them come alive to us.

What a priceless food fight! Absolutely cracked me up (pun intended!) !!

haha this was a fabulous story...i dont know why they did not see the humor in it...smiles....ha, nice...

Oh what a great story!!

Yeah I think a novel is a good idea. I could not have laughed harder. I'd expect kids to do this, but not grown ups!!!

they made a scrambled mess didn't they?? :)

with a great story like that, I think the story teller deserves and should be wearing a typewriter key necklace (with an S) xoxo

You are a great story-teller!

That must have made a terrible mess. I wonder who cleared it up? Think I can guess.
Wonderful story telling.
Maggie X

What a fascinating story, all kinds of psychological overtones in something apparently simple.

I heard that eggs are good for your hair occasionally! That's quite some story and I have a feeling two people will be smiling from somewhere as you wrote it for us all to read!

Love this story...hehe and they never did laugh about it!!! thats funny too.
Nice to hear from you Sandi my how time flies.
I am still not over our Guy Sandi.
I do love, adore Ted but guy was special to me. I think he is still with me.
Love that old photo. Why is it that we just cannot get even with all the techy cameras we have, an image to look like it back then? even when they try these days, it is not the same.
Cxxx

Well shoot! Until you told me how mad they really were I thought they were plalying. I'd have died laughing right then and there. LOL Great story Sandi! Thanks for sharing it.

Funny afterwards but alarmingly serious at the time!