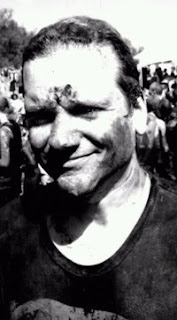 The 1900's are behind us now.  Even my darling Arianna, who was born in 1999 is a century away, it seems,  So how does a father born in 1916 and a son born in 1971 feel about birthdays these days?  Well, apparently they feel pretty darned good!  As a gift to two of the most important men in my life, we had a party of sorts at the Smokehouse restaurant.  Wanting to thank one of the best cooks in the state for preparing this feast, I looked for (owner) Roger Knight, but he was no where to be found.  I had decided that no way could I compete with the spread that Roger lays out on a four day basis, that and the fact that he has a crew to do the clean up.  All we had to do was eat and leave.  Oh, and pay the tab,  No problem,  Son Wallace had spent Saturday at the USMC Mud Run in Columbia, South Carolina with three teammates,  They completed the run, which was all that really interested them.  Apparently 14000 people had shown up for the event and being mowed down by speed was not a problem, either,  The mud took care of that .  Now  Daddy celebrated the day by sleeping in rather than go into the office, mud not being his thing, he elected to stay out of it,    You might find this odd but for the fact that he  turned 95 years old, still practices medicine and attends to patients on a daily basis,  Even Sundays,  While we were in the Smokehouse, at least three patients spied him there and corralling him, congratulated him on his longevity,  To their credit not one of them offered up symptoms for diagnosis while in his presence, 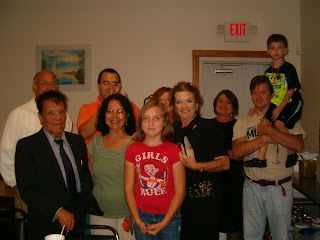 So naps and mud runs aside, our day yesterday was filled with laughter and memories and I wouldn't trade one second of it for the world,  Somehow, I don't think they would either!
Posted by Sandi McBride at 7:22 AM

Happy Birthday to your men, Sandi! I'm thrilled that it was such a good day for all! Your Dad is amazing! Wallace on a USMC run? Wow! When did he serve?

Hope that you and the boys/men have the best of weeks!

What a lovely way to celebrate family, Sandi. I just love your granddaughter's charming face and Girls Rule red t-shirt, she seems so undefendedly authentic.

Sounds like a really good day out. Happy birthday to your men :-)

Happy birthday to them Love Mary

Happy Birthday to the 'boys'!

I find the fact that your Dad, at age 95, is still up and about and practicing medicine to boot! That is really awesome!
And so nice too that you had a dual celebration of the birthdays as well. Good vibes for all around that way, huh?

Happy Day indeed, when you get to celebrate two important fellows. It sounds as though you did it up right and everyone had a wonderful time.

I am so glad you have this joy in your life. God bless and amen.

Fun tribute to your two birthday boys! Happy birthday to both.

I'm glad you're back...missed you over the summer months.

Your dad is absolutely amazing. Happy birthday to your men.

Happy birthday to the men in our life Sandie; the younger looks a bit like a dirty Russell Crowe.

To two of the men in your life! Happy Birthdays!
Lovely family photo.
Maggie X

Arianna is so tall and pretty. My son moved to Pittsburgh and I am heartbroken.sk so far.

What a great photo! Looks like everyone was in party mode.

Come on over Sandi I have a little something for you to collect.

Left you something at my place Sandi.

I hope they both had wonderful birthdays. Your Dad sounds like my Grandmother. She lived to be 103. Unfortunately neither of my parents lived to have very old age but it was good having one Grandmother so long.

I think it's magnificent that your Daddy still practices. He obviously loves his work, and I have no doubt his patients are blessed to have him!

Happy belated birthday wishes to those two important men in your life! It is so good to hear that you dad still practices medicine, kudos to him and his view of life!

Happy Birthday to your father and your son! What a great way to celebrate...all together! Who's that making the bunny ears? :D

Listen, as soon as I get your tea cozy together...and it's been started believe it or not...you'll have my addy again. That's one way to keep me on track.

What a Wonderful time y'all must have had! 95...a Great age!!
hughugs

Oh what a happy celebration. Happy Birthday to the two men and huge kudos to your Dad for continuing his practice. A beautiful family photo.

Sounds like you had a wonderful day full of celebration.;) And of happy moments among family and friends.;)
Happy belated birthday to your two important men.;)
xoxo

Sandi you have a wonderful father, that is one big mile stone. Happy birthday to both men. Anna :)

I love this blog. It makes me want to move to the country and you can't beat Nickel Creek playing.
Very creative.